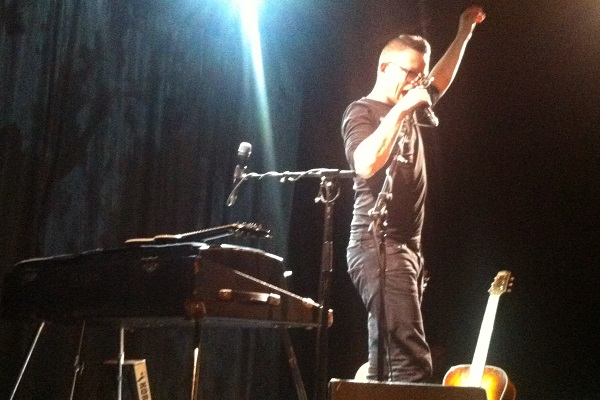 Norwegian musician/one-man band Bernhoft came back to play the Bowery Ballroom on June 24th, nearly seven months after his last NYC show at the same locale, this time to celebrate the US release of his newest album, Islander. The crowd in attendance was larger and much more enthusiastic for his return, as his popularity is increasing here in the States. Bernhoft himself acknowledged this at the beginning of his show, stating that he has been all over the world but that this crowd was something else.

Opening with one of the selections off of Islander titled “Wind You Up”, Bernhoft coolly showcased his charisma and musical craftsmanship throughout his show, taking the audience on a thoroughly entertaining ride. Many in the crowd served as Bernhoft’s backup singers for nearly all of his offerings, participating with zeal and enjoying every minute of it. The only outlier to this was Bernhoft’s performance of “Don’t Let Me Go,” a song so slow, soft, and powerful, it commanded absolute silence from the crowd while he played it. While the album version is great, the song is simply stunning to experience live, and proves that Bernhoft is just as adept at balladeering as he is playing upbeat tunes.

Bernhoft did a great job mixing in songs from all of his prior releases, pleasing both years-long fans and those new to the Bernhoft train alike, however it was a little surprising that he only played four songs from the album that came out that day. Still, each song performed was done impeccably, with Bernhoft making great use of his trusty loop pedal allowing him to create catchy melodies that had the whole house moving. Bernhoft also added a video background behind him to give his set a more visual atmosphere compared to his show last November, and it only served to enhance the experience.

“C’mon Talk” and the Tears For Fears cover “Shout” were predictable (and wonderful) crowd favorites, but Bernhoft’s first single off of Islander, “Come Around,” was another song that was very well received and even had some people in the front row doing the Carlton dance to its easy-going, catchy melody. Bernhoft shared that he came up with “Come Around” after hearing Toto’s classic “Rosanna” on the radio during a two-hour convertible drive to Los Angeles down the Californian coast. He said it was his goal to create a song similar to it, and one that you wouldn’t mind hearing over and over again on a similar drive. I think it’s safe to say he succeeded.

Overall, Bernhoft’s second straight visit to Bowery Ballroom was even better than the first, to say nothing negative about his initial performance. Even after the show, Bernhoft’s energy continued to linger in the venue, culminating in an impromptu group dance party more commonly reserved for 1990’s teen movies or events featuring “Cupid Shuffle.” Combining his music with a confident stage presence and comfortable interplay with the audience, a live Bernhoft show deserves to have a spot on your must-see concert list.

Opening the show was Conner Youngblood, another one-man band act whose sound has shades of Bon Iver, The Album Leaf, and Sufjan Stevens mixed in with the solo stylings of our headliner. A young musician from Dallas, TX, Youngblood’s performance showed some raw talent, but his set had nearly the exact same melancholic pace throughout, which began to lose most of the crowd who were looking for a slightly more dynamic show. On his own or with a more appropriate pairing, I might be singing a different tune so to speak, but the unifying characteristic of being his own band wasn’t enough to sustain the Bowery Ballroom audience.