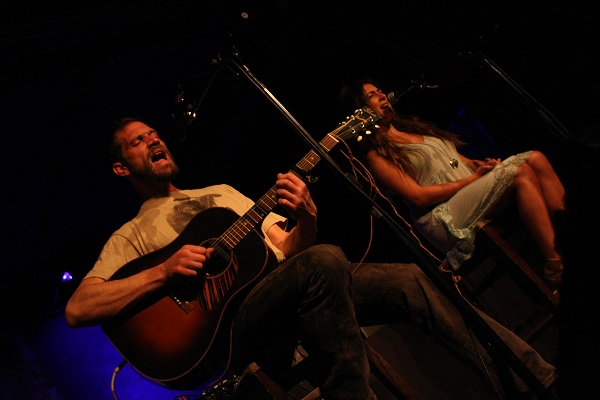 Ben Taylor is definitely a bit counter-culture when it comes to what we imagine as the archetype of a contemporary singer-songwriter. Yes, he’s rugged, charming and navigates an audience easily with an acoustic guitar slung over his shoulder. On the other side of the coin however, is a man who yearns to experiment with the boundaries of his music. He toured through NYC with a stop at City Winery last week, who welcomed the singer with his own bottle of wine, “Crazy Abe’s Filthy Zin“.

His live show this tour primarily features him on the acoustic. He was often joined onstage by nascent singer Sophie Hiller, who is working towards her own solo debut. A humorous dialogue was kept up with the audience, often featuring tales of his father, James, and his interactions with the fans of both generation of musician. The second half of his set is where things got weird; Ben put down his guitar and busted out the electronics.

This part of the performance I really enjoyed, which featured looping vocals and live remixing of other songs. From the acoustic side of things, it was a jarring departure, and audience members with less of a taste for experimentation were likely turned off. Such is the cost of wild artistic expression. The show’s encore featured an electronic jam session with tour manager Jon Nola and electronic specialist Ryan Casey (Kodacrome), and then a finale where Ben introduced singer Mieka Pauley, and left the stage for her to end the set on a lovely note.

Rachel Ann Weiss opened the City Winery show. The NYC local released her debut album, Dear Love, two years ago. Armed with a guitar, a strong voice, and a pianist, she delivered songs from that record and also covered Amy Winehouse’s “Valerie”.