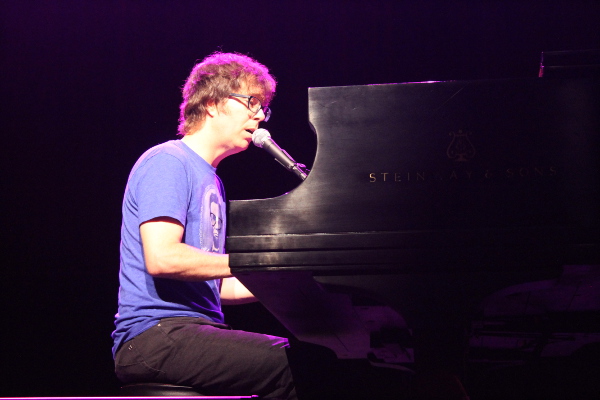 At 47 years young, Benjamin Scott Folds is still the same quirky voice of the 90’s generation. A native of Winston-Salem, North Carolina, Ben is most popularly known for his time as frontman and pianist for alt-rock band, Ben Folds Five, which temporarily disbanded before re-uniting in 2011. He descirbed the group as ‘punk rock for sissies.” The lyrics usually contained self conflict, undertones of melancholy, sprinkled with tasteful profanity and melancholy. Folds has performed as a solo artist (releasing 6 solo LPs as of 2008) working with other musicians like Regina Spektor, undertaking experimental projects,but always staying true to his pianist roots.

Ben Folds played an interactive, nostalgia riddled performance at The Space at Westbury on June 23rd. All that appeared on the spotlit stage was a single black piano and Ben perched on the wooden bench in front of the white keys. An abnormal move for Folds, considering his performances are usually accompanied by a somewhat full orchestral section. Without hesitation, he placed his hands on the keys and started serenading an already riveted audience, fingers dancing gracefully amongst the black and white ivories. Ben opened up the set with “Effington” and “All U Can Eat”, one of his most popular songs. The words were spirited and the melody, notoriously catchy. The lyrics were sung back from the audience, which was littered with both old and young

Ben punctuated between songs with his usual banter and joking antics about his “nerdy” past, eliciting chuckles of familiarity from those who can relate to the awkwardness. Later in the show, Ben started playing “Rock this Bitch”, where he excitedly enticed the crowd into a 3 part harmonic round. The joy on Folds’ face was apparent as the strains of music mixed together from the audience; it’d be so easy to just imagine this skinny, bespecked man as a third grade music teacher, with similar zeal and enthusiasm for the art. After that round, Ben calmly got up and walked over to a turquoise drum set on the right hand side of the stage that’d be “secretly”set up during his performance, and banged out an unarguably epic and fun drum solo- filled with high hats, cymbal inserts, and infectious bass drum.

The crowd goes wild for him as he slams upon the drums. After finishing that set, he returned to the piano, and leaned toward the audience looking for “requests”. The obligatory “FREE BIRDDDDDDDDD” is shouted from somewhere in the back of the dark room, without hesitation, Ben slides into a cover of the Lynyrd Skynrd classic, exhibiting his ability to joke and affinity for spontaneity. He then wraps up the performance with the melodic and slow-moving take of “The Luckiest”. Lights dim, couples sway arm in arm with their partners as the song draws to a close, Ben gets up and bows gratefully. “ONE MORE SONG! ONE MORE SONG! ONE MORE SONG!”, screams the crowd; one cannot help but oblige an adoring audience, and Ben Folds was no exception. He steps back out for a two song encore consisting of the popular Ben Folds Five song “Narcolepsy” and finishing finally with “One Angry Dwarf and 200 Solemn Faces”. The lights finally come back on and the crowd roars with applause. As the room empties out, people walk arm in arm echoing the words they just experienced. It was a great night to be had by all.