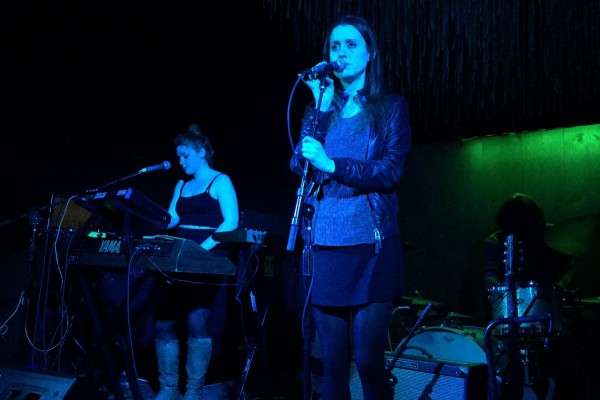 March 22nd was the last day of the massively popular SXSW music festival in Austin, TX, but that didn’t stop NYC from continuing with offering great shows by new, up-and-coming bands as per usual. Cameo Gallery was the site of one such show that Sunday evening, headlined by Belle Mare, a dark, indie, dream pop quintet fronted by London native Amelia Bushell and Brooklyn-based Thomas Servidone. The ‘Beet caught a brief glimpse of Belle Mare when they opened for Yellow Ostrich’s final gig during Glasslands Gallery’s “Lastlands” period this past December, so it was nice to have a more prolonged experience of their music this go around.

Belle Mare’s first EP, The Boat of the Fragile Mind, has been out for almost two years now, but Bushell and Servidone are in the beginning stages of releasing music off of their new album, which Bushell stated during their show “would hopefully be coming out in the fall.” Belle Mare’s music is quite pleasant, if not melancholic (Mazzy Star’s “Fade Into You” kept playing in my head throughout their show), and both of these feelings were enhanced during their live set, evoking a more nuanced emotional connection to the lyrics and melodies of the music they performed.

Bushell treated the audience to a healthy dose of music off of their aforementioned EP, but peppered in a few new tracks that will be on their upcoming release. “Georgia” and “Every Night” were very good songs which I look forward to hearing their studio versions later this year, and the first single off of the new album, “Cicada”, was unlike most of their other songs (in a fantastic way) as it gradually built over the course of 5 minutes to an awesome crescendo that closed their show with a flourish. Calls for an encore were happily received by Bushell, including some from her parents who were gleefully in attendance. Unfortunately the band had already started closing up shop, but they did plug their next show, which will be April 6th at Manhattan Inn.

Opening the show was a pretty unique six piece band (only five played the show, as their accordion player wasn’t there) named Floating Compass, who utilized an eclectic compilation of instruments to create their sound, including a mandolin, banjo, upright bass, and one (sometimes two!) trumpets. Lead singer Tim Cronin and his band of merry mates performed a healthy collection of music, along with a handful of new songs that they were playing for the very first time. Their sound calls to mind variations of Irish folk music, complete with tales of epic journeys and the like, and was certainly enjoyable to hear. They are playing a couple shows later this month as well, one at Pete’s Candy Store on April 7th and another at Arlene’s Grocery on April 19th.