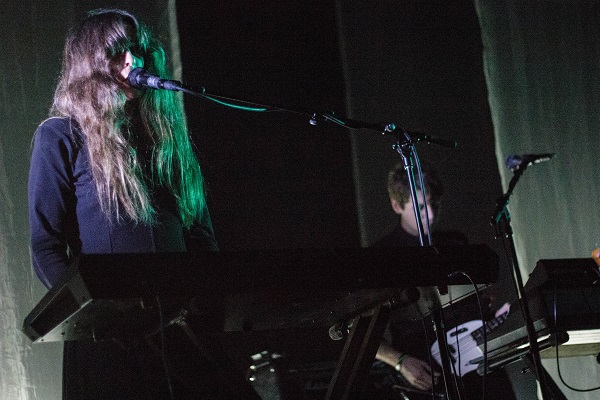 Victoria Legrand and Alex Scally of Beach House have been endearing themselves to fans of chill indie pop for years now. The Baltimore dream pop powerhouse released Depression Cherry in August, the follow-up to their critically-acclaimed 2012 release Bloom. Naturally, I pounced on the opportunity to see them live and they did not disappoint the sold out College Street Music Hall crowd a few weeks ago.

Everything about their setlist for the evening was perfect. Their distribution of material was very satisfying as they touched up on on their new material a good six times, never back to back, all the while sprinkling in offerings from Bloom with strong older tracks like “Gila”, “Take Care”, and much more. I’d definitely give credit to their setlist building option that they offered us on their website leading up to the show. Assembling a playlist based off fan voting is superb method of interactivity, even though my vote-spamming for “Other People” and “The Hours” was all for naught.

There was something masterful about the setlist progression as well. They eased us in early with some of their most low-key new material like “10:37” and “Levitation”. “Wild” and “Lazuli” generated some energetic momentum before they reached the meat of Bloom and Depression Cherry. Their main set ended with a light-filled performance of “Sparks”. The energy buildup ended with an all out explosion when Beach House concluded their encore with “10 Mile Stereo” which turned into a pulse-pounding strobe fiesta that capped things off commendably.

Victoria Legrand’s subtly cheerful stage presence was extremely pleasant. Her mood flowed with the physical atmosphere, as a starry backdrop emerged from behind the band after the first three songs or so. Some alternating visuals kept things appealing to the eyes the entire time. I was finally able to see Beach House establish themselves as the complete live package. They had tweeted that they’ll have plenty of New York City shows on the horizon, so be on the lookout for that.

Let’s not overlook their touring partner, Romantic States, from Baltimore as well. The duo’s noisy experimental sound reminded me more and more of early 90s shoegaze as their opening set progressed. The track they concluded with took a page out of My Bloody Valentine as I felt completely enveloped by sound. For the pair, they produced some serious sound that is worth checking out.