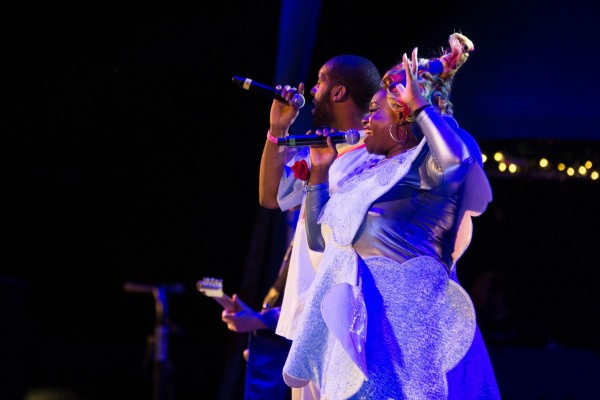 Central Park Summerstage 2015 is currently under way and with a solid line up to boot. The festival was founded in 1986 and it spans several music genres, from American music, to modern dance, and family programming. It’s located on the outdoor venue at Rumsey Playfield and it runs during the months of June, July, and August with show tickets being either free or very affordable. We had the chance to cover one of Summerstage’s Benefit Concerts. This one featured UK electronic project Basement Jaxx, with openers Fei Fei, The Internet, and Master at Work.

The Internet is the duo of Syd Tha Kid and Matt Martian, former members of the legendary rap group Odd Future. They were pretty quiet for a little bit, but have been recently touring around the city since they released their latest album, Ego Death, for which they had a release party the night before at Baby’s All Right. Syd’s calm and cool stage presence was great, engulfing the audience with her soulful voice that were accompanied the chill electronic beats that the group is known for. RnB is making a strong comeback, and The Internet is clearly one of the strong leaders in making it popular again.

Masters at Work followed with a dance party full of modern electronic dance music and classic dance beats. The group is a house garage duo based in New York that remixes a lot of genres, it consists of “Little” Louie Vega and Kenny “Dope” Gonzalez.

Basement Jaxx closed the night with a performance that was stock full of guest appearances, dance numbers, and wild antics on stage. The British Electronic dance duo rose to popularity in the late 90’s. With a lot of singles and hits being featured in popular media. Their roots were in house music but slowly diverged into other genres such as pop and world dance. Incorporating exotic sounds and other genres into their music and collaborating with a lot of musicians from around the globe. Their latest album Junto was released last year to positive reviews and it was a return to their house roots. Their show at Central Park featured a lot of past and present collaborators singing live versions of their biggest hits like “Power to the People”, “Where’s Your Head At”, and “Raindrops”.