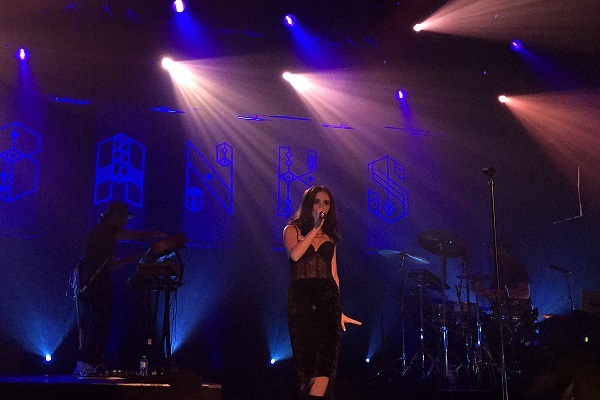 Fresh off of her debut LP released early last month, Jillian Banks (better known only as Banks) played to a raucous crowd at Terminal 5 at the end of September. This was on the short list of shows I was most looking forward to this fall, and I was curious to see what the reception would be based on how amazing her set was on the Sunday of Governors Ball this past June, as I felt that those of us in attendance were catching Banks right before the tipping point of her popularity. I was pleased to see I was correct in that assumption, as there were nearly 300 people who were lined up to get in before the doors even opened, which was something I’d never experienced for any of the shows I’ve attended at T5. I couldn’t wait to see how her show had evolved over the past few months, especially with the potential incorporation of some of the tracks off of Goddess, and once the show began to a deliriously happy sold-out crowd, Banks did not disappoint.

If you have not had the chance to either see or hear Banks’s music, try to imagine a combination of the following: the ethereal yet sultry stage presence of Stevie Nicks, the low-key R&B stylings of How To Dress Well and S O H N (who is one of her occasional producing partners), and a voice that calls to mind apt comparisons to Nelly Furtado and Fiona Apple. From the outset of the show, kicked off by her very first single “Before I Ever Met You,” Banks entranced the audience with every word and subtle movement, many of which were gladly singing along with her. She performed nearly every song from Goddess during the show, which had a distinctively different feel from the one at Gov Ball due to a longer set and wider range of musicianship on her part.

To wit, Banks’s transparent, visceral lyrics hit just as many chords whether she was singing about empowerment (“Goddess”), being lovestruck (“Fuck Em Only We Know”), or emotional disappointment (“This Is What It Feels Like”). She even sang a cover of Trey Songz’s “Na Na” which completely transformed into something you would have thought was a Banks original the way it was delivered. However, it was when she performed the softer, acoustically-twinged “Someone New” that really showcased Banks’s vocal talents and ability to captivate the audience on her own merits. Ending her show with the popular recent single “Beggin For Thread” and an encore performance of “Stick,” Banks further announced herself as one of the best artists of 2014, and ended up on my list of my favorite performances this year.

Opening the show that evening was an Aussie trio named Movement which was the perfect complement to Banks’s performance later in the evening. Their smoky, intimate, lo-fi take on electronic R&B comes across like they derived their sound from throwing The Weeknd, the xx, Rhye, and Sam Smith into a blender and came up with the best qualities of each of them. Only having released a self-titled EP so far, Movement’s music is meant to be experienced rather than listened to, as Lewis Wade’s exquisite vocals are even better live than they are on their album. Tracks like “Us” and “Like Lust” were amazing offerings during their set, and I’m looking forward to see what this Sydney band has in store for us in the future, as they are one I certainly wouldn’t mind seeing again.