Bad Religion Hosted a Battle of the Centuries 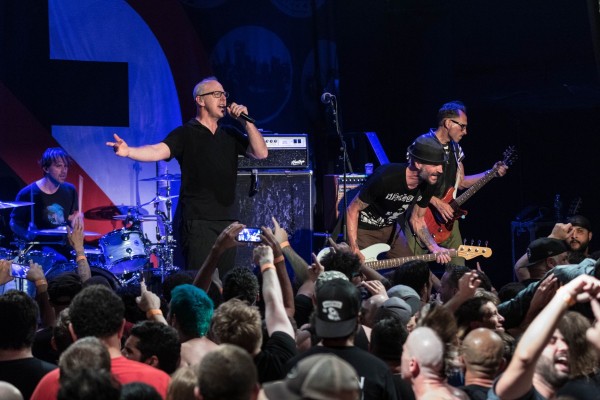 When it comes to punk rock, Bad Religion’s influence and mastery of the craft has an undeniable place in history. And, they’re still kicking with a strong vitality. Regularly on the road, the band came to NYC to play four nights at the Bowery Ballroom & Music Hall of Williamsburg, each sold out and highly sought after. There was an interesting duality to them; the tour was billed as “The Battle of the Centuries” which featured alternating nights of content divided by the millennium. Bad Religion is one of a handful of bands I can think of that can pull off that kind of marvel.

I guess I lucked out attending one of the pre-2000s’ nights, but that did mean missing out on some favorites like “Sorrow” and “Los Angeles is Burning”; I came into a fandom of Bad Religion around 2005’s Empire Strikes First. But alas, I’m not one to complain getting to hear choice cuts from the range of their albums from 1982’s, How Could Hell Be Any Worse? to 2000’s The New America, and especially 1988’s Suffer, objectively regarded as one of the most important records in punk rock. “American Jesus“, “Atomic Garden“, and “Infected“? Yes, please.

Bad Religion’s shows are very well known for their active, aggressive audiences, with vocalist Greg Graffin remarking that half their show is them. If you’re able to let loose that fury, being in the epicenter of that madness is its own release and the electric tension of being there is a reason to cite for many about the band’s continued touring success. Graffin commands from the stage like an orator, and the lighting is expert, bursting at the right moments for the crowd to make their collective mark on each song.

Props to Plague Vendor who opened these shows. The punk band is a newly minted act on Epitaph that put out their debut last year, Free to Eat, recently followed up with a single “Wanted Man.” The group is a convincing rock quartet, and frontman Brandon Blaine exhibits an alluring fusion of madness and athleticism that could make them future stars with some more winning material under their belt.