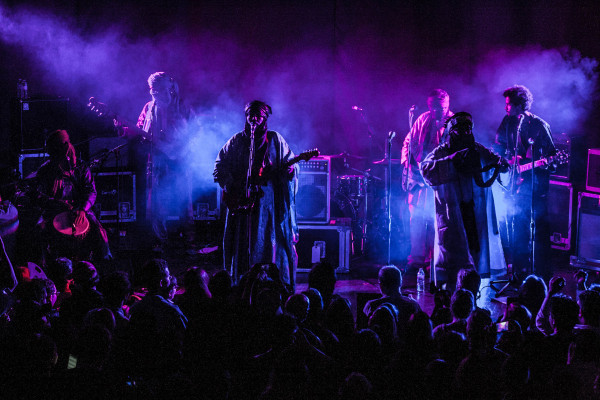 Anti Records celebrated a unity of several of its most compelling acts at the Brooklyn Masonic Temple with a concert dubbed Anti Thesis. Two of our favs, The Antlers and Tinariwen, featured on the bill and rustled me out to take in the evening’s sights and sounds. It would be a long one, with four full sets of music.

Lonnie Holley got things rolling, with a curious set of keyboard melodies. He was backed by a full band including rotating vocalists to harmonize with. The sound was rather bizarre, especially his vocals and lyrics which are difficult to parse with his distinct voice. I admire the creativity that goes into putting a project like this together, and the music stands on its own, but is absolutely at odds with most pop and rock sounds I’m used to.

Storied producer Daniel Lanois is to credit for curating Anti Thesis, and performed second with his band. The set he played landed somewhere between the worlds of psychedelic electronica and ambient. Especially enjoyable was the end of his set which had him utilize the steel guitar. Him and Lonnie Holley are on tour together nationally.

The Antlers set was rather short this time, playing just five songs, all extended cuts from Familiars, their third record starting from Hospice. If you haven’t listened to it yet, it’s a formidable continuation of their unique brand of melancholy and ambient rock music. They have been touring heavily on it this year and are just now on break before heading to Australia in February. “Director” and “Hotel” off the new record both really shine live.

Tinariwen closed the night, and the large troupe of Malian rockers always make for a spectacle on stage. The desert blues they sing become truly convincing in a live setting, and the dancing they inspire is real. They played an electric, plugged-in set despite recently releasing an acoustic EP. Tinariwen’s tour will continue in Western Europe. For the finale of the night, all the performers joined Tinariwen on stage; a final gathering that encapsulated the spirit of communion through music that Anti Thesis aimed to provide.