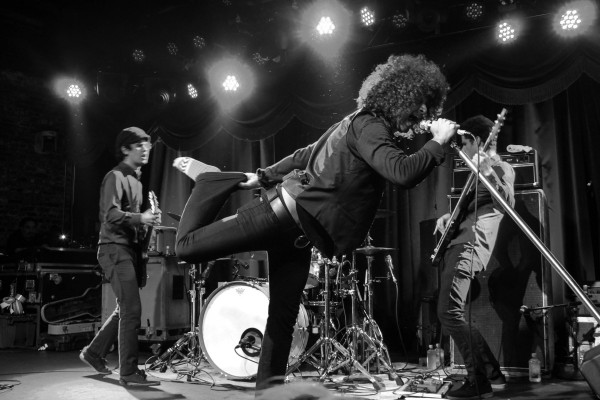 Last Saturday, Antemasque stopped by Brooklyn Bowl to jam with their fans. The new band from Omar Rodriguez-Lopez and Cedric Bixler Zavala isn’t something you can label easily, there’s a little bit of classic rock, punk, and prog rock here and there, but what matters is that when Lopez and Bixler take the stage, they play like they mean it. Their performance had undeniable energy and coherence, with the duo (back together since The Mars Volta (TMV) was dissolved) on their top game.

I would argue their new sound is closer to At The Drive In (ATDI) than TMV, with punk influenced songs that together span around 35 minutes in studio. But live, they jammed for well over an hour, with a rendition of their song “4 AM” going up the 20 minute mark. A combination of Omar’s lengthy guitar solo and Cedric’s dance grooves and perfect note-hitting voice got the crowd roused for more near the end of their set. This was followed up by “People Forget” and that’s when people started fist pumping, singing along, and moshing. Antemasque’s show was not only fun, it was energetic, funny, and kind of quirky. Omar and Cedric have aged well,  their sound has matured, but live they still have the energy of a punk rock band full of early twenty year olds, throwing mic stands, and jumping off drum kits. Dave Elitch (formerly from TMV as well) plays the drums with incredible precision, in complete sync with the rest of his bandmates. I’m a huge fan of both TMV and ATDI and  unfortunately never got a chance to see either live, Antemasque’s show more than made up for it. Their album is out now everywhere.

And if their peculiar performance wasn’t enough, their opener Le Butcherettes, a garage punk band formed in 2007 by Teri Gender Bender (who’s part of Bosnian Rainbows with Omar),  gave one hell of an oddball performance, causing mixed reactions from the audience. Their stage presence is violent, comical, and serious at the same time, and Teri can hit incredible notes while playing the guitar, a keyboard, and having half her face covered in masking tape. You can check out their sounds here.