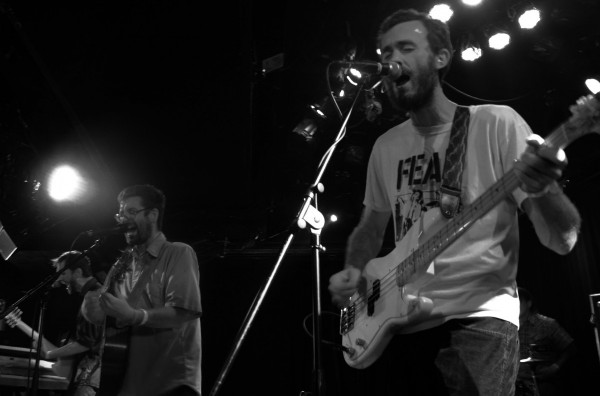 Andrew Jackson Jihad has been set to play at Le Poisson Rouge since 2012, when their first show was cancelled due to hurricane Sandy. Touring in support of their latest album Christmas Island, AJJ did not miss out on the chance to deliver some frenzied old favorites to this hyper and adoring crowd. Opening support was provided by Cheap Girls and Dogbreth, members of a tight-knit circle of DIY artists that have so much fun doing what they do it’s hard not to want to be involved.

Dogbreth comes across like your friendly neighborhood punk band, all sorts of quirky and honest. Hailing from Phoenix, Arizona, their mix of noisy melodic power pop puts them in the perfect spot to captivate a crowd with the opening slot. Tracks like “Sentimental Health” blend dreamy vocals with a caffeinated kind of energy, recommended for fans of Lemuria. You can tell how amazing it is for them to be on tour, making music every night with their closest friends and with fellow artists whom they respect.

The last two times I’ve seen Andrew Jackson Jihad, frequent collaborators Cheap Girls also happened to be on the bill. The crowd grew significantly louder when they got on stage, playing favorites like “Barely Alive” and “Parking Lot”. I’m a huge fan of how consistent this band is, delivering the sing-along aspect you expect at a punk show while still commanding the audiences attention like an honest to goodness rock band should. Their presence at LPR was comforting, and I’ve enjoyed learning about this band purely from a live perspective.

Last January, Andrew Jackson Jihad was one of the opening acts at the amazing farewell show for Bomb The Music Industry! who called it quits at Warsaw in Greenpoint, Brooklyn. In an almost bittersweet fashion, AJJ carried on the mantle at LPR with Jeff Rosenstock of Bomb! there to support. Jeff joined the band on stage for a song or two, stepping back and forth between playing drums and giving out numerous hugs. Opening with new(ish) song “Kokopelli Face Tattoo“, the crowd immediately hit fever pitch and pushed forward, sending a couple of crowd-surfers over the human barricade. The band very politely asked the crowd to refrain from crowd-surfing (I’m pretty sure LPR frowns on the practice) and did their best to remind everyone to respect the safety and personal space of the front row. Catching AJJ as a twosome with a just guitar, a stand-up base, and a room full of singers is absolutely satisfying but seeing them as a full band in support of a new album was a rare form. Singer/guitarist Sean Bonnette was able to put down his instruments and take the mic, playing spazzy front man for “Do, Re, and Me” which was a switch he seemed really happy to make.

There was a fan in particular who stayed firmly planted in the front row trenches with me. During the show, I noticed the back of her x-marked hands while she used sign language to sing along to a few of AJJ’s songs. When I asked if she was fluent in sign language (my mother is a speech pathologist), she told me that it is offered as a class in her high school. As a personal project, she took it upon herself to learn to the lyrics to a couple of AJJ’s songs because they meant that much to her. As AJJ started to take the stage, she tapped bassist Ben Gallaty to share her thanks, saying how much their music has helped her out in the past. That sort of give-back relationship between musician and fan came across so clearly on this night that the positive vibes almost made me forget the one song about a gerbil in the microwave.