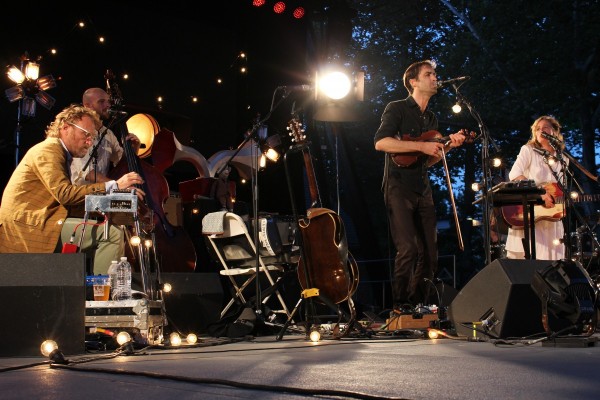 Back in June, we found ourselves a long ways away from Neat Beet HQ and under the sweltering Bonnaroo sun. It took a special kind of musician to keep an audience’s focus off the heat and on the music and spirit of the festival. Although he didn’t make our Top 5 Bonnaroo Performances of 2014, multi-instrumentalist folk artist Andrew Bird did exactly that and performed one of the better sets of the weekend.

Three weeks later, we found ourselves facing the familiar heat (it peaked at 91 degrees) and crowds of Bonnaroo but in our own backyard. Andrew Bird & The Hands of Glory performed a free concert as a part of Central Park’s Summerstage series. Bird’s backing band featured long-time collaborator Tift Merritt, former Bowl of Fire bandmate Kevin O’Donnell and others.

Opening the evening of music was Luke Temple, best known for singing in Here We Go Magic. Accompanied by a percussionist, he performed pieces from last year’s release, Good Mood Fool. He remained seated throughout the performance, as did much of the crowd. It was an unfamiliar site to behold but certainly allowed the emphasis to be put on his performance.

Bird opened his performance alone, donning an all-black ensemble (his jacket didn’t last long) and without a word to the crowd. It wasn’t until three songs later that his Hands of Glory stepped out on stage to accompany him. Bird remained the focal point of attention throughout the performance but credit should be given to his bandmates for their interpretation of his prior solo works. While ample attention was given to his solo works, much of the performance focused on the album of The Handsome Family covers he published earlier this year. (Things Are Really Great Here, Sort Of…) As the sun set, the mood lighting adorning the stage in the forms of stringed lights and vintage TV studio spotlights turned his performance into a multi-sensory experience.

Andrew Bird & The Hands of Glory was one of our Top 10 Free Summerstage Shows To See This Year. If you didn’t make it out, they perform in Bridgeport, CT at The Klein. Although not free, tickets are still available. Photos from last night’s Central Park performance can be found below.