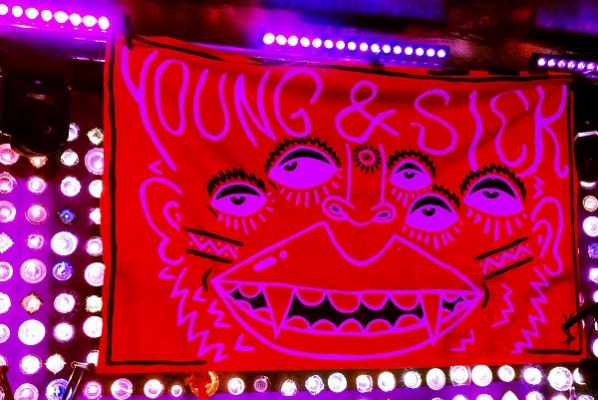 My biggest fascination of 2014, and soon to be yours, is Young and Sick, a mysterious art and music project currently based here in NY. The music lies in a nice niche of electronic-laced R&B, and stands entirely well on its own, but perhaps it is the artwork that’s drawn me in most. The intricate lines and attention to detail immediately catches your eye, and I’m not the only one to think so. Young and Sick has done album art for some highly visible artists in the past few years, such as Foster the People, Maroon 5, and Robin Thicke. His largest project to date was the massive mural Foster the People commissioned last month for their “Coming of Age” music video.

My research has uncovered that Young and Sick actually is one guy. His first name is Nick, and he formerly put music out under the moniker Japayork, which was a flash in the pan in the electropop genre a few years ago. Since the ascension of Young and Sick, all of his music under that name has been diligently scrubbed from the internet. The only linkable item I could find is a remixed track of “Teenagers“. The similar voice, and his press shots confirm the link.

The live band performs as a trio. Nick sings and occasionally plays guitar, while he is flanked by two other members who provide support on synths, keys and backing vocals. A special highlight was “Willow“, which featured a plucked violin. For only their second show ever, they were surprisingly complete; the only absent item is live percussion. The set was cohesive, engaging and had a groove going for people to dance to. The unreleased music we heard is tight and the act is definitely ready to go on to bust out Coachella, the group’s only other upcoming live dates.

Props to Yellerkin who opened the show. The band, a duo between Adrian Galvin and Luca Buccellati, puts out catchy indie pop as a four piece live. Their music aptly has a focus on the vocal, the group frequently harmonize together with whistles or hums as backing notes in addition to their instrumentation. The electric banjo was a nice touch too. Yellerkin just put out a self-titled EP, their first release. It’s a sharp effort, but way moodier than expected after seeing their upbeatness live.