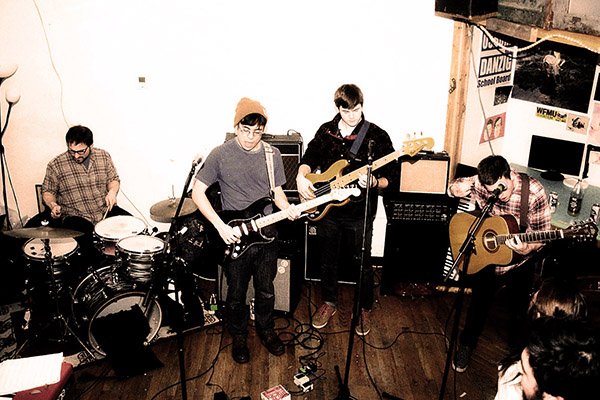 The eccentrically named David Blaine’s The Steakhouse is a DIY venue on Bushwick’s Myrtle Avenue. The space is actually an apartment, whose residents handle all the responsibilities this sort of operation requires. The group there has been putting shows on featuring quality underground bands for a few months now, and I found my way there for their fourth night of operations.

Upon walking in, I heard a cover of Florence + The Machine’s “Kiss With a Fist“, delivered by New Jersey rock band, We’re Ghosts Now. The band is a quintet, mixing things up a tad with a dedicated vocalist and an electric violin. Their music shines with the weaving between the two singers over fast guitars. Soothing and folky indie pop duo Summer Underground played before them, but I missed them.

The absolutely bizarre but totally compelling Spooky Dangerfield (& His Long Lost Revival Band) followed. The group is a four piece from Boston who experiment with an interesting fusion of instrumental rock, synth and comedy. Though they don’t appear to take themselves too seriously, with constant joking and pranking, each member definitely plies their trade well. The album they’ve crafted is a pretty tight blend of light-hearted and creepy.

The concluding band of the night was Dreamt, formed in Ithaca. They exemplified the serious side of a compelling live act. I found their spectrum quite interesting, they hit bluesy folk rock in some songs but punch back with jazzy, keyboard-heavy pieces to follow. The singing was nice and instrumentation raw, giving them a nice rustic feeling at odds with the small quarters we often have to make due with here.

John, thanks for the thoughtful words. it really was a very fun night...Beautiful shots Jay!

Cheers! Thank you all!