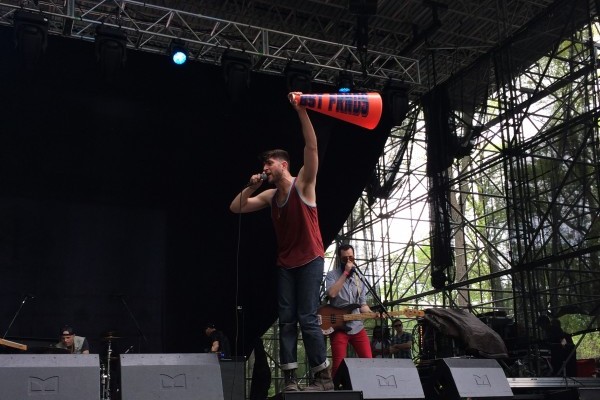 I adventured to Columbia, Maryland last weekend to experience the Sweetlife Festival at Merriweather Post Pavilion. The festival, now in its fifth year, champions local restaurateurs and farmers, which is always an ethic to support. On the musical side, they put up a solid billing of contemporary pop and electronic dance acts.

I can confirm the tasty food options, having eaten lunch and dinner on site. Vegetarians didn’t have to fret for options at all. I nommed on falafel and fries early for some quality carbs, and a quinoa burger combo’d with cauliflower salad rounded out dinner. For hydration, I opted for a steady drip of iced coffee.

In regards to the music, Sweetlife did a great job minimizing the amount of overlap between sets. Also the sound quality was pretty great whether close up or very distant. The vast gap between the two stage’s sizes made for a strange dynamic however, where some acts who can command huge audiences like Chromeo wound up feeling very intimate at the Treehouse. I wound up lurking around there for most of the festival, as the Pavilion’s massiveness led to a disconnect for me.

First up was GEMS at the Treehouse, a chilled out dance duo local to DC. The low tempo to their music and early stage time led to their set being more of ambient noise for people wandering around. I’d enjoy seeing them again bottled up in a dark basement venue, dancing in my own little world. Their Medusa EP is a solid first offering, and we’ll be keeping tabs on their future activities.

I wandered around for a while and settled on returning to the Treehouse for Spirit Animal, of Brooklyn. They’re a fun group of young lads who make that sort of in your face rock music that’s funky and fun to jump around to. The band recently put out a fresh new single, “Bst Frnds”, as they lead up to a proper debut album. Singer Steve Cooper yelled out the lyrics for it while holding up a faux loudspeaker with “BSTFRNDS” emblazoned upon it.

Next up at the Treehouse was ASTR, who are another nascent act out of Brooklyn. The duo makes a sexy brand of electronic dance that’s infused with NYC’s night vibes. Zoe Silverman excels as frontwoman for the band, with a confident aire and her emphatic dancing. ASTR are preparing to release their debut album and will co-headline Bowery Ballroom for a sold out show with The Knocks on 6/11.

At the Pavilion following was Irish soul singer, Hozier. Legs splayed out on the lawn, relaxed and listening contently, I was strongly reminded of Dallas Greene’s City and Colour project during his set. The melancholy and triumphant elements of his music formed a nice dichotomy, and a brief rain shower near the set’s conclusion fit the mood perfectly. His debut album should be out here near summer’s end.

Back at the treehouse, I caught up with St Lucia for the first time live in two years, which was way too long a wait. The band has totally established themselves as an electronica staple since their first LP, 2013’s When the Night. Tropical dance vibes were in full effect during hits like “September” and “Before the Dive“. They crammed all they had into their forty minutes and we moved our feet in turn.

One of the reasons I came to this festival was to see Capital Cities live. 2013’s In a Tidal Wave of Mystery is an album full of synthpop wonders. I was excited to see that their live iteration has a full band, including a very prominent trumpet player who ruled the stage during the many brass parts of their material. The short time allotment saw the downtempo elements of Tidal Wave truncated to focus more on cultivating a riotous dance party. They’ll be back in the area supporting Katy Perry’s stadium tour this Summer.

Fitz and the Tantrums followed Capital Cities over at the Pavilion. Their anthemic blend of soul and pop music lent itself well to the big stage. Its defining whistles and “oohs” echoing across the entirety of the area were charming noises to witness. My hangout spot on the lawn saw plenty of people dancing their own interpretations of the music. More Than Just a Dream, their second album, came out last year.

I lingered at the Pavilion for the start of Lana del Rey’s set, but it was just too serious and dramatic for me to enjoy. I departed early for Chromeo, which was totally the right choice. I was literally able to wander up to the barrier and establish a dance team out of the peeps there. Chromeo’s success is proof that disco ain’t dead, and with a crazy light show, a strong discography of hits, and a quality new album, White Women, I got in a great hour of grooving.

Chromeo’s set overlapped with Foster the People‘s headlining set and I banked on not missing any of their hit singles from Torches. I wound up correct with that planning, but couldn’t factor the slightest bit for the weather. What defined their set most was the intense rainstorm that struck shortly after I got there, sowing bedlam among the lawn’s denizens. Since it wasn’t that cold and there was no retreat to be had anyway, I wound up dancing in the mud with the other crazies, identified in the dark by the color of our glowsticks. Listening to songs like “Coming of Age” and “Helena Beat” in those conditions was simply a catharsis; I’d struggle to think of a better way to close out the fest and welcome Summer.