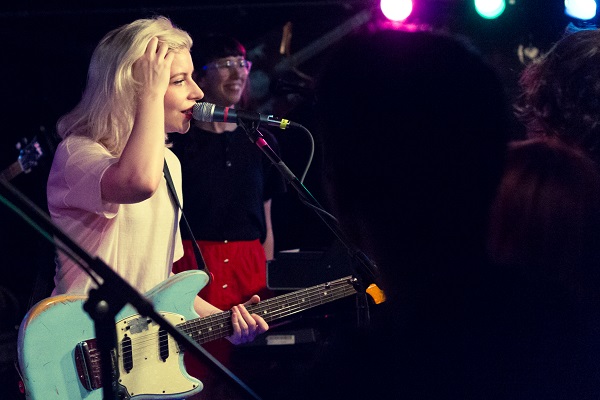 I had the opportunity last week to go see Alvvays at The Space. Of course I went! American Wrestlers opened the show, drawing from songs off their awesome 2014 self-released and self-titled debut, which has since seen a re-release on Fat Possum Records. American Wrestlers, fronted by Gary McClure (who wrote, performed and recorded the album himself on an 8-track) plays their own lovely variety of lo-fi indie pop. “I Can Do No Wrong” had me getting into it, but the band had a couple equipment failures and some very stubborn tuners to deal with and it took away from the experience. Still, they were well-rehearsed and clearly happy to be playing for us, which is all you need. They dealt with their problems as quickly as they could and played us a few more songs (“Kelly”) before McClure threw down his misbehaving guitar and smashed the neck.

And then a pause.

Alvvays (formed in Toronto by long-time friends Molly Rankin and Kerri MacLellan) is a gorgeous explosion of watery guitar and punchy drums. Their music, lyrically speaking, touches on family, heartbreak, and deathly fear of financial commitment set to vivid backdrops of nighttime walks through the woods and sunny rock-hopping on the beach. “Next of Kin” details a scene in the woods by a river, and as an enthusiastic woods-walker and rock-hopper it’s easy (and immensely fun) for me to submerge myself in the music.

Molly Rankin’s honest and curious lyrics are nicely augmented by her kind (and tongue-in-cheek) stage presence. Between “Ones Who Love You” and “Archie, Marry Me” she called for the shorter people in the audience to move to the front, and filled gaps between songs with gently sarcastic humor. Alvvays’ set that night contained close to the entirety of their 2014 college-chart-topping album Alvvays, released on Polyvinyl. The audio was great across both sets and deserves a mention. Whether due to the band or the engineer, The Space’s sound can be a mixed bag. This time I was able to listen comfortably and easily and pick apart the mix without earplugs. Great show, Alvvays. Come back soon!