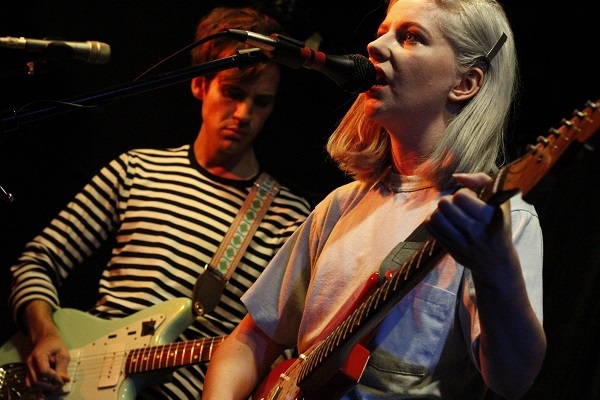 Toronto’s Alvvays performs some of the most infections lo-fi pop rock you could possibly come across. They played last  Sunday at The Outer Space in Hamden, CT, which offers up a lounge-like setting with tables in the audience. That scheme was ditched as the audience preferably settled in right at the stage on foot. The end result was a show even more intimate than intended for the venue. All five members of the band were crammed onto the small stage, which made you feel even more immersed in the action

Alvvays is very good at cornering you with a lo-fi sound that leans into dream pop territory with the culmination of their guitars, keyboard and the soft, whimsical vocals of Molly Rankin. Their self-titled debut LP was released in late July this year by way of Polyvinyl in the United States and was the centerpiece of the concert. Alvvays covered most of the album, satiating their staunch supporters with strong tracks like “Party Police”.  They finished off their set with the crowd-pleasing, “Archie, Marry Me”, which has already helped Alvvays cement their name in the indie world this year.

The show’s opener, Team Spirit, really played up their rock and roll influence throughout their set with their face-paced riffs and crazed guitars solos from frontman Ayad Al Adhamy. The Brooklyn-based band offered up an energy that caused the evening to pick up steam incredibly fast. It was surely worth head-bobbing to, but a more open setting and rowdier environment would do wonders for a set from these guys.

Check out all the photos here.