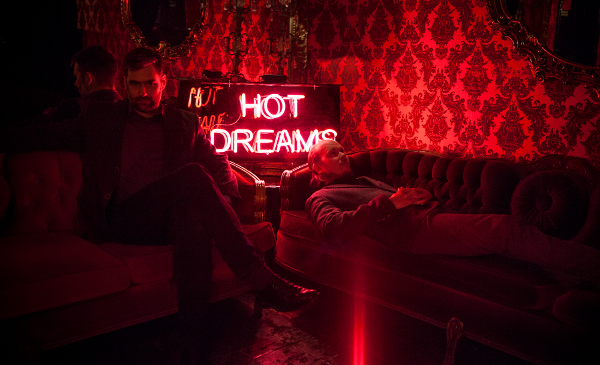 Happy April Fool’s Day! Don’t believe anything you read on the Web…except this: We now have a Spotify album playlist that gives you instant updates each week! Simply click our “Neat Beet Albums of the Week” playlist and follow. It’s that simple!

Manchester Orchestra – Cope
Down in Atlanta, you’ll find one of the fastest rising talents in rock music. They’re called Manchester Orchestra and they are a quintet comprised of Chris Freeman, Andy Hull, Robert McDowell, Andy Prince and Tim Very. Their last album peaked at #21 on the charts here (and hit #5 on the alt. specific charts) so we are crossing our fingers that Cope pushes the band to be bigger than ever. The group that has toured with Brand New is now headlining an excellent tour with Balances & Composure and Kevin Devine & The Goddamn Band. Their area show is at Terminal 5 on May 22nd.

Cloud Nothings – Here & Nowhere Else
Indie rock buzz-worthies Cloud Nothings is comprised of Dylan Baldi, TJ Duke and Jayson Gerycz. They have been a longtime part of the Carpark Records family (Beach House, Dan Deacon, EAR PWR) and with the release of Here & Nowhere Else they will have four albums under their belt with no intent on stopping. There are plenty of chances to see this band: The Low Beat in Albany this Saturday, The Space in CT (April 12) Music Hall of Williamsburg and Bowery Ballroom the following days. And of course, another reason to check out Bonnaroo.

Christina Perri – Head Or Heart
Katy Perry sings of being a “Dark Horse” but it is singer/songwriter Christina Perri who is the dark horse of the pop world. Her love for theater and her astute attention to detail (especially with watching videos of others playing guitar) helped shape her into the musician today. “Human” is playing heavily on commercial radio and will be played heavily throughout your car stereo this week. She plays two sold out dates at Irving Plaza on April 16 and April 17.

Malachai – Beyond Ugly
Malachai isn’t one person. Malachai is a UK duo who has Portishead’s Geoff Barrow to thank for major recognition. He fell in love with the band’s use of samples and beats. You will too – but take one look at the band’s discography and you’ll wonder if Gee Ealey and Scott Hendy were hugged enough as children. Beyond Ugly is the third studio album by this Bristol, UK duo that follows the “ugly” theme. (Ugly Side of Love and Return to the Ugly Side are the others)

The Used – Imaginary Enemy
Warped Tour has helped launch the careers of several music groups. The Used tops this large list of successful rock groups. They’ve been around since 2001 and have undergone minor changes in both sound and lineup (and relationship: remember when lead vocalist Bert and Kelly Osbourne were an item?) The group’s co-headlining tour with Taking Back Sunday hits several area venues but are mostly sold out.

Split Single – Fragmented World
With Dave Grohl being an inspiration to so many musicians, we just have to ask: who is inspiring Dave Grohl? Jason Narducy, who heads the indie project Split Single and has played with Britt Daniels, Bob Mould and Telekinesis, was one of them. This project was founded just a mere couple of days ago but is already garnering quite a bit of attention. Split Single also has a plethora of album bundle packages that fit any size budget.

Jamaica – Ventura
French electro-rock duo Jamaica are the missing link between MSTRKRFT and Death From Above 1979. The band was formerly called Poney Poney and made the switch to their current moniker right before their self-titled debut. Ventura is sure to be a very catchy, fun sophomore release.

Thievery Corporation – Saudade
Whether you want to confess to it or not, Zach Braff and Natalie Portman helped introduce a large generation to a pool of (as of then) undiscovered musicians. Garden State told us that “New Slang” “…will change your life…” and while it certainly has, it was “Lebanese Blonde” by Thievery Corporation that was a stand-out track. The dub/bossa nova/electronica/downtempo/world music giant is simply two D.C. residents who share an interest in fusing genres and a powerhouse chock full of famous vocalists from around the globe. Saudade is the group’s 8th studio album.

Leon Russell – Life Journey
We talk about bands releasing 6 or 7 albums and while impressive, its about how much Leon Russell does in a decade or two. More impressive than his beard is his work ethic. His first release was before the famous Woodstock Music Festival and his most recent release is a collaborative album with Bonnaroo headliner Elton John. Leon Russell tours with Hot Tuna in Connecticut, New York and New Jersey from June 18-June 22. Venues include StageOne, The Capitol Theatre, NYCB Theatre in Westbury, Bergen Performing Arts Center and Pine Belt Arena.

The Body – I Shall Die Here
American sludge metal band from north of here, The Body have seen some success as a part of Thrill Jockey Records and have even collaborated on an entire release with noise group Braveyoung. They are haunting and dark and everything you’ve ever wanted from a metal project.

Lacuna Coil – Broken Crown Halo
Milan is known for its luxurious fashion and tourism. But for goth metal? Lacuna Coil turn 20 this year and will be releasing their seventh full length studio album. Entitled Broken Crown Halo, the album has the hard-hitting single “Nothing Stands In Our Way” and is sure to be a goldmine of eerie metal.

Band of Skulls – Himalayan
The White Stripes are a successful band. Many bands strive to sound like them. But it is alt-rock/blues rock band Band of Skulls that have successfully made the connection – while giving the band an identity of their own. The group is from Southampton, UK and Himalayan marks the band’s third successful album since 2009.

Mac DeMarco – Salad Days
Mac DeMarco is making such a flurry throughout the Web. At just 23, he’s being hailed as “the next big thing” and one listen to his solo work is just confirming that. He’s on the lineup for Bonnaroo, has a sold out album release show at Baby’s All Right on the 8th and a sold out show at Webster Hall the next day.

Sonata Arctica – Pariah’s Child
Stand-alone the finest metal band from Finland (and yes, there are plenty) is Sonata Arctica. The band is formerly known as Tricky Beans and while their sound hasn’t evolved too much, we’re glad the band name has. The band is playing Mexicali Live in New Jersey and Stage 48 in New York City. Both shows also have reasonably priced Meet+Greet packages.

Mobb Deep – Infamous Mobb Deep
We all know that New York is holy land for hip-hop and R&B. Brooklyn gave us Busta Rhymes and Run-DMC. The Bronx gave us Fat Joe and Kool Keith. Even Long Island gave us Public Enemy and Aesop Rock. But when it comes to Queens, Mobb Deep seems to top them all. Juvenile Hell, the duo’s full length debut, just became old enough to order a drink. Havoc and Prodigy continue to deliver great rap with dark undertones. If you missed their show at Gramercy over the weekend, you’ll have a chance to see them at Irving Plaza Powered by Klipsch Audio. Brooklyn duo Smif-n-Wessun open.

Inventions – Inventions
Grab a blender, shake a dash of Eluvium and a pinch of Explosions in the Sky. Put the power to 11 and you have Inventions. Matthew Cooper and Mark Smith were longtime friends before they headed different projects. Their instrumental, orchestral rock project is sure to garner the attention it deserves even without the mention of their former projects.

Nickel Creek – A Dotted Line
Platinum-selling records is usually reserved for the Lady Gaga’s and Jay-Z’s of the music industries. But for a bluegrass album? No. Nickel Creek is in fact a platinum-selling and still successful modern folk/bluegrass trio. Alison Krauss produced their self-titled album in 2000. A Dotted Line is their fourth release since then and the group’s sixth album total. They headline the majestic Beacon Theatre on April 29th.

RAC – Strangers (Part II)
We tend to not cover remixes too often but one listen to a track touched by the Remix Artist Collective (RAC) and you’ll forget about the original. They’ve touched everything from Phoenix’s “Armistice” to U2’s “Magnificent” and have even released an EP of video game tracks remixed. (RAC Nintendo Vs. Sega EP)

Chevelle – La Gàrgola
The family that plays together, stays together. This alternative rock band still holding onto the fringe of grunge was originally comprised of two brothers, Pete and Sam Loeffler. They let their little bro play in their band one day, named themselves after the classic and notoriously fast Chevy and the rest is history. Since then, little Joe has left the band. Luckily, Pete and Sam continue to perform as Chevelle with Joe’s replacement/brother-in-law Dean Bernardini. This album is lucky #7 for the group.