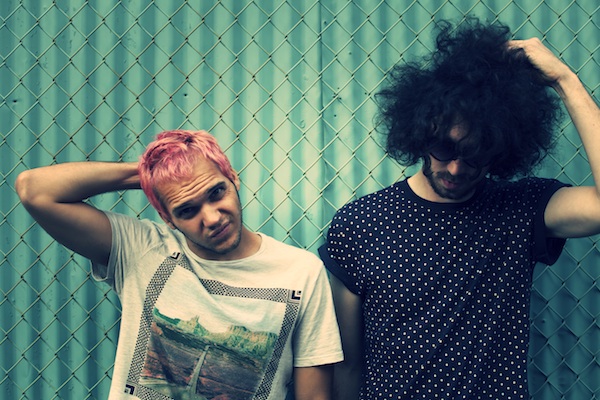 There are lots to look forward to in March…and we’re not talking about Daylight Savings Time.

Real Estate – Atlas
Personally, one of my favorite bands around now and one of the albums I have had my eye on for a few months. (no wonder they are one of the 15 acts playing Bonnaroo this year that we recommend) They are a very quiet surf rock band with excellent songwriting skills and an endless arsenal of catchy hooks. The band is playing sold out shows on the first Friday and Saturday in April at Music Hall of Williamsburg and Webster Hall. Pure X opens both of these shows.

Ume – Monuments
Adam Kasper is the Grammy® Award winning producer that has worked with Nirvana, Queens of the Stoneage and Firefly headliner Foo Fighters. He is also the producer and driving force behind Monuments, the second full length release by Ume. It is a powerful album and is certainly expected to be a hot contender for end-of-the-year rock album charts everywhere.

Pharrell [Williams] – G I R L
Just when we thought “Get Lucky” was the end-all of pop music as we know it, guest vocalist and all-around cool guy Pharrell released “Happy”. Infectious, catchy and universally loved by most, the single became the cornerstone of the Despicable Me 2 soundtrack and will be a stand-out on what is expected to be an exceptional sophomore release. Head over to Madison Square Garden early on July 14 and July 15 to see him open for Bruno Mars.

Holly Golightly – All Her Fault
Not to be confused with the leading woman from Breakfast at Tiffany‘s, Holly Golightly Smith is a London-based singer/songwriter. She has recorded with the likes of Billy Childish in the past and will be touring this April with her full band, Holly Golightly & The Brokeoffs. She performs at the Knitting Factory in Brooklyn on Wednesday, April 16. Connecticut’s Cafe Nine hosts them on Saturday, April 19.

Ghost Beach – Blonde (pictured)
One of the hottest rising bands in electro-pop isn’t from Western Europe or down under but in our own backyard. Brooklyn-based Ghost Beach is comprised of Josh Ocean and Eric Mendelsohn. The bands founding may seem like yesterday (it was actually last year) but the group is already promising to be a must-see act at SXSW. You can also see them open for another fun band, The Sounds, at Webster Hall. Tickets are still available for the April 10th concert.  Blondfire is also on the bill for that show.

Eternal Summers – The Drop Beneath
Indie-pop band with dreamy vocals. That is only the tip of the iceberg that is Eternal Summers. The band is based out of Roanoke, VA and are currently on Kanine Records, the same label Chairlift and Surfer Blood call home. Those who want to check out this band live may need to move their schedule around: Eternal Summers plays between Little Racer and headliners Cheatahs at Baby’s All Right on Tuesday. Tickets can be purchased here.

Rick Ross – Mastermind
Fair warning: “War Ready” has gunshots throughout the song. I made the mistake of listening to it for the first time on the road and nearly wet myself. But that’s what makes Rick Ross so great: he’s one of the few hip-hop artists that isn’t just talk. The man looks intimidating too. And he’s good. Mastermind is his sixth solo full length and it features Diddy, Kanye West, The Weeknd and French Montana.

Lushes – What Am I Doing
Lushes are James Ardery (vocals, guitar, synths) and Joel Myers. (drums, SPD-S) Together, they make indie rock that is full of surprises. Their upcoming release, What Am I Doing is mixed Adam Cooke, the hands that touch previous Double Dagger and Beach House albums. Those who want to check out a hot new band but escape the Big Apple for the weekend can see them in Annandale-on-Hudson on Saturday, March 29. Venue and openers are TBD but keep to their website for updates.

Ava Luna – Electric Balloon
As New Yorkers, we are the lucky to be within a short distance to a handful of iconic theaters and concert venues. Harlem’s famed Apollo Theater is just one of these theaters that has become a great focal point for the likes of John Lennon, James Brown and Gorillaz. Most recently, New York-based pop band Ava Luna performed in the historic venue. Electric Balloon features the single “Daydream”. The band is currently on tour with Krill. Their final stop is at Silent Barn on March 25. Until then, check out some photos of the band as they said farewell to 285 Kent.

Fenster – The Pink Caves
Thanks to the Germans, we have modern Christmas traditions like decorating trees and moving them indoors and unhealthy foods like chicken fried steak and gummy bears. But we can certainly add Fenster to that list. German for “window” (source: Chrome’s awesome Translate plug-in) this band is comprised of members from Berlin, France and New York. The Pink Caves is their second album and those who want to hear most of it live can head to Shea Stadium tonight (3/4) at the band’s Record Release Party. No advance ticket sales but you can find the information on their Facebook listing.

We Are Scientists – TV en Français
The post-punk revival brought us some very cool bands, many of them surfacing this year. (especially with The Strokes and Interpol high on the Governors Ball Music Festival roster) Another band that joins this list is We Are Scientists. TV en Français is the band’s fifth album and is expected to have the indie alt. rock mastery that made their four albums over eight years a great addition to anyone’s album collection. Before you give this album a listen, buy tickets for their Bowery Ballroom show on Friday, April 18. Tickets are available and I am honestly surprised it hasn’t sold out yet. (but it will)

Roman Remains – Zeal
Roman Remains is electronic-infused rock that can certainly pal around with some industrial rockers on the playground. This band opens for Big Black Delta and the cool grandfather of electronic/industrial music, Gary Numan, at Webster Hall. (check out the player at the bottom of their website for a remix of Numan’s “I Am Dust”) Buy tickets today for the Saturday night show.

Wolves Like Us – Black Soul Choir
If you’re angry about the ongoing threats of snow and even G I R L won’t help you out of your rut, you may need to just let off some steam. Enter Black Soul Choir. The album is the second studio release from Olso-based heavy metal band Wolves Like Us. If you’re a fan of the genre, you’re probably looking forward to them. But for those afraid of the term “heavy” may find it an enjoyable listen too.

American Authors – Oh, What A Life
If you DVR all your shows and pay for Spotify Premium (yes, it’s worth it!) your probably saying “American Who?” American Authors are the brains behind the drum-line-influenced rock/pop single “Best Day Of My Life” which can be found anywhere from a Lowe’s commercial to The Secret Life of Walter Mitty. If you haven’t heard it, take a listen to it. It will be everywhere this summer, including the band’s two local tour dates this summer: Nikon at Jones Beach Theater in June and PNC Bank Arts Center in August. OneRepublic and The Script headline both of these shows.

Drive-By Truckers – English Oceans
It’s not everyday that I have a conversation about Southern Rock with someone. But when it does come up, Drive-By Truckers is always the first band mentioned. Rightfully so, too. The band launched the career of one of my favorite musicians behind a guitar, Jason Isbell, and is still headed by Mike Cooley and Patterson Hood despite numerous lineup changes. The band is well on their way to 20 years and English Oceans is proof enough that they aren’t slowing down. The band is taking another great band (Blitzen Trapper) under their wing for a tour that takes them to Toad’s Place in New Haven, CT on March 18 (a great way to shake the St. Patrick’s Day hangover) and NYC’s own Terminal 5 two days later.