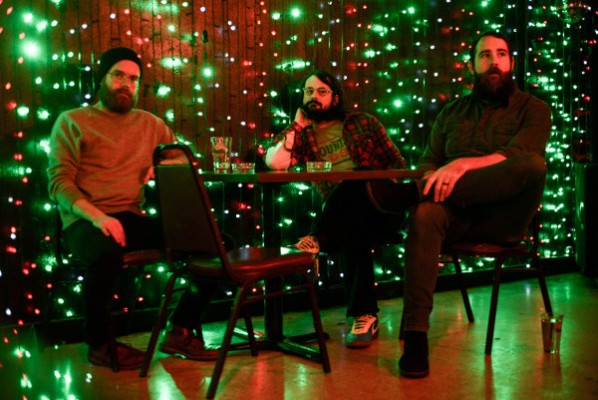 Smell that? It’s Springtime in the air. Or that new record smell…

Via Audio – Natural Language
We had the honor of speaking to Jessica Martins and Tom Deis (better known as Via Audio) about both their upcoming album Natural Language and their forthcoming album release show at Glasslands. Check out our On The Beet feature and be sure to snag up some tickets for the March 30th concert before they sell out. Elizabeth & The Catapult and Spirit Kid open the guaranteed fun night.

Tokyo Police Club – Forcefield
This Canadian rock quartet has seen whirlwind success since releasing their catchy, upbeat debut EP A Lesson In Crime. Forcefield is the band’s third album of original material (fourth LP if you’re counting the album where they covered the likes of Moby, LCD Soundsystem and Harlem Shakes) and has shown some promise so far. TPC’s only local appearance will be on May 15th at Webster Hall with Geographer and Said The Whale. Tickets are still available.

Simone Felice – Strangers
Born in Upstate New York, Simone Felice was once one of the three founding brothers that made up The Felice Brothers. While Ian and James are still manning that project along with other members that they share no relation with, Simone has branched out on his own as a solo project. The album features 10 tracks and was recorded not far from his birthplace (and from us) in the Catskills. Those who are a fan of the Felice Brothers will surely want to check out the many shows hitting the area. New Yorkers will have a chance to see him on Thursday, May 22 when he plays Rockwood Music Hall‘s Stage 2. New Jersey fans can catch him the following night at Live @ Drew’s in Ringwood. The following night, he plays Kingston, NY’s BSP Kingston. Connecticut fans will have to wait until May 29th and June 14 when he plays StageOne and Cafe Nine respectively. Start planning your road-trip now: tickets are still available for all shows.

The Colourist – The Colourist
Hailing from the O.C., The Colourist is a math-pop band comprised of members of Paper Thin Walls. This self-titled debut is released on Republic Records and features the very memorable track “Little Games”. Those who have been reading our article on ten acts to check out at Firefly Music Festival may want to add The Colourist to their list. For the impatient, The Colourist play two shows in New York. Along with Night Terrors of 1927 and Wind and The Wave, The Colourist hit the stage at Rough Trade NYC tonight. Tomorrow’s early show at Mercury Lounge is sold out.

Owls – Two
There is only one good thing that has come from the (now twice) Cap’n Jazz breakup: Owls. The band was founded in 2001 during Cap’n Jazz’s first hiatus. They released a very critically acclaimed self-titled debut but nothing else seemed to blossom from it…until now. Thirteen years later, Owls are releasing their second full-length appropriately titled Two. Sadly, it might be a while longer until we see tour dates from this group.

Johnny Cash – Out Among The Stars
Fans of “The Man in Black” may want to pick this up on their lunch break today. Out Among The Stars is a posthumous album comprised of the country icon’s lost (and recently found) recordings from sessions he had in studios during the 80’s. This album has 12 (or 13, depending on which edition you get your hands on) of previously unreleased tracks.

Colourmusic – May You Marry Rich (pictured)
We often hear of musicians infusing their sound with their philosophers, scientists or historian idols (Starfucker does it all the time with Alan Watts snippets) but creating a whole sound based on one’s theory? It can be none other than Colourmusic who confessed that their sound (and much of their discography) is inspired by Isaac Newton’s Theory of Color and Sound. Even if you are unfamiliar with this concept, (guilty) you can hear that their psychadelic-rock/folk sound has more substance than similar artists in the genre.

Liars – Mess
Proudly representing New York this week is Liars, a three-piece experimental noise rock band that has a large, expansive discography. Their newest release is to be called Mess which not only includes “Mess on a Mission” but even has real yarn infused with the vinyl. (if you purchase the record) Liars play Thursday, May 8th and Friday, May 9th at (le) Poisson Rouge and The Wick respectively. Tickets for both are still available but both shows are expected to sell out.

Big Scary – Not Art
We all know the adage “Almost doesn’t count.” While true for many situations, it can’t be said for being nominated for a triple j Album of the Year award. Big Scary’s Not Art was nominated for Australian Album of the Year and while it fell short of taking home the grand prize, the attention surrounding this band is incredible. The album that has thrilled Australian and New Zealand fans for close to a year is now being released on our shores.

Shakira – Shakira.
Judge on NBC’s hit televised talent show The Voice and the winner of twenty-eight (yes, 28!) Billboard Latin Music Awards, there are very few in pop music who can do what Shakira can. Shakira. is the Colombian artist’s 10th studio album and while it may fall short of “She Wolf” (the song that stands close to the top of my imaginary list of guilty-pleasure pop songs) there is no doubt that her album will do well nationwide and result in a successful tour in the near future.

Somos – Temple of Plenty
Somos is an alt-rock/indie-punk hidden gem and should be on your new music radar. The group is based out of Boston and touring in support for Temple of Plenty – the group’s exceptional debut album. They are playing The Wood Shop on Long Island on Saturday, April 19.

Future Islands – Singles
Every week, you’re bound to hear something about a 4AD artist. Bon Iver, The National and Ariel Pink’s Haunted Graffiti are just a small taste of what they offer. This week, we’ll be discussing Singles from 4AD staple Future Island. The synthpop band from MD is certainly gaining a lot of buzz and one listen to “Seasons (Waiting On You)” will put everything in place. The band graces a sold out crowd at Webster Hall on April 30th.

The Hold Steady – Teeth Dreams
Hailing from Brooklyn, The Hold Steady is a rock band headed by Craig Finn. The band is best known for their narrative-style of music composition. (a style former bandmate Franz Nicolay still utilizes in his writings) Teeth Dreams is the band’s sixth full-length LP and is produced by long-time Foo Fighters producer Nick Raskulinecz. They play alongside Deer Tick at New Haven’s Toad’s Place on Friday, April 18. Tickets for that unforgettable show are still available.

Animals As Leaders – The Joy of Motion
Progressive metal hailing from the Mecca of hardcore, Washington D.C., Aminals As Leaders is comprised of Tosin Abasi, Javier Reyes and Matt Garstka. They have toured with some of the greatest bands in post-hardcore and death metal (Decapitated, Carnifex, Underoath, Circa Survive, Thrice…) and oddly enough seems like a perfect fit for both clashing genres.

Kylie Minogue – Kiss Me Once
Merry Christmas to me! Two of my female pop crushes (Shakira being one of them) are releasing an album in the same week. Kylie Minogue’s Kiss Me Once is her first album in four years and her eleventh in an extensive, fruitful career. Just like Shakira, she is a judge on Australia’s answer to The Voice. But unlike Shakira, she has her own line of bedlinens and throw blankets.

Howler – World Of Joy
The surf rock revival we are currently experiencing has brought about some great bands. Howler is one of them, who was one of the biggest breakout bands of 2011 according to NME. The band is back with their follow-up to their successful debut America Give Up. This album is called World of Joy and will be released on Rough Trade.

Fireworks – Oh, Common Life
Signed to Triple Crown Records, the New York-based label that helped make Brand New, As Tall As Lions and Kevin Devine household names, Fireworks is a pop-punk band representing Detroit. Oh, Common Life is their third album and based on the reaction from their previous release entitled Gospel, we can expect great things from this album and from Fireworks. The band, along with Modern Baseball, Citizen and Real Friends, opens for The Wonder Years at Best Buy Theater on Thursday, April 17th. That show is unfortunately sold out.

Nathan East – Nathan East
We are very familiar with the contribution Pharrell Williams and Nile Rodgers had on Daft Punk’s summer blockbuster “Get Lucky”. What you may not know is that the person playing that funky bass is none other than Nathan East. He is a bass playing machine, best known for his works in R&B and jazz. He’s also performed alongside Eric Clapton, Stevie Wonder and Phil Collins. His self-titled will feature original compositions.

London Grammar – If You Wait
Although the title of their debut album, If You Wait can also be taken as a message to American fans. The trip-hop/electronica trio from Nottingham (sorry, not London) released this album late last year in Australia and the UK. Since then, the album went gold in Australia and platinum in Great Britain. We’re hoping US sales of this stellar album can catch-up too. London Grammar play to a sold out Irving Plaza Powered by Klipsch Radio on Wednesday, April 9th.

Architecture In Helsinki – NOW + 4EVA
NOW + 4EVA sounds like a working title for a One Direction album but is actually the fifth studio album from funky indie pop troupe Architecture in Helsinki. They are from Australia and despite some line-up changes, are continuing to create effortless, fun, dance-able pop songs.