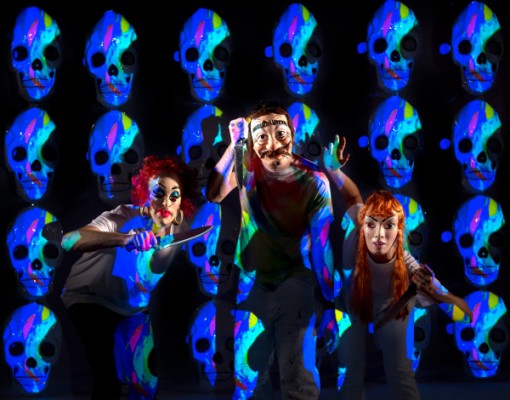 Protomartyr – Under Color of Official Right
We know Detroit is the birthplace of the automobile and Marshal Mathers but it is also where post-punk greats Protomartyr call home. The Hardly Art signees share a record label with Jacuzzi Boys and Seapony but take you on a wild, hair-raising ride with hard-hitting tracks. Under Color of Official Right is the band’s second album overall, their first from Hardly Art. The band headline Death By Audio this Saturday and open for Parquet Courts at the Sugarhill Supper Club almost two months later.

Avey Tare’s Slasher Flicks – Enter The Slasher House (pictured)
Animal Collective have pushed the envelope and changed what it means to be “indie”. Avey Tare is the muscle behind the project and while the band is off the road, created Avey Tare’s Slasher Flicks. The indie supergroup also has Jeremy Hyman of former Ponytail fame and Angel Deradoorian of Dirty Projectors. Enter The Slasher House is the group’s first album, will be released on Domino Records and will be the driving force behind their tour which hits a sold out Bowery Ballroom on April 21.

Shy Hunters – O That I Had Wings
I don’t know much about Dan Brown novel Angels & Demons but I imagine that Shy Hunters did their best to channel that sound, if only by name. The indie pop band’s heavenly vocals and intense guitars seem to battle it out with both of them coming out the victor. The band is from Brooklyn and will headline host their album release party at Union Pool on Friday, April 25. A couple of weeks later, the band returns to Union Pool. This time, they open for Jolie Holland. Advance tickets for that show are available.

EMA – The Future’s Void
Sometimes we wonder how an artist comes up with their stage name. There’s no mystery with Erika M. Anderson’s stage name, EMA. Probably one of the few bigger musicians to call South Dakota home, she specializes in noise-folk music and could really play a band all by herself – she knows her way around a guitar, bass and electronics. She performs a late show at Mercury Lounge on Friday, April 25. Tickets are (surprisingly) still available for that show.

Young & Sick – Young & Sick
Music and art certainly go hand-in-hand but none do it better than Young & Sick. Spearheaded by Nick Van Hofwegen, Young & Sick is an art and music project. You may not have heard the stellar tracks like “Gloom” or “Heartache Fetish” but you’ll probably recognize their art. (Foster The People, Robin Thicke and T. Mills are just some the many artists who have used his art) He performs (musically, of course) at Bowery Ballroom on June 19.

Kronos Quartet – A Thousand Thoughts
A string quartet on the same record label as Wilco, Ben Folds and The Black Keys? San Francisco’s Kronos Quartet have covered works ranging from Vladimir Martynov to Philip Glass and even have an album of Bollywood songs. This new album features sounds from unique cultures and includes collaborations with Homayun Sakhi and Omar Souleyman.

Teebs – E S T A R A
Teebs is an instrumental hip-hop artist from the west coast. Teebs is a one man show of total sensory overload and beat music at its finest. He’s remixed the likes of Flying Lotus and Nosaj Thing and has recorded EPs with Daedalus and Prefuse 73. E S T A R A is Mtendere Mandowa’s full-length sophomore release.

Off! – Wasted Years
Hardcore punk supergroup Off! is bringing punk back into the spotlight. This group is made of one part Burning Brides, (Dimitri Coats) one part Redd Kross, (Steven Shane McDonald) one part Hot Snakes/Rocket From The Crypt (Mario Rubalcaba) and one part Circle Jerks/Black Flag. (Keith Morris) Off! are on a headlining tour in support of Wasted Years with Cerebral Ballzy and NASA Space Universe. They hit Asbury Lanes in Asbury Park, NJ on May 12 and Bowery Ballroom on Saturday, May 17. Tickets for both shows are on sale now.

Squarepusher – Music for Robots EP
We’ve seen enough Youtube videos to know that the Japanese can put a crazy spin on just about any normalcy. We also know that Squarepusher aka Tom Jenkinson is always putting a crazy spin on electronic music by infusing acid house and even jazz to his live sets. So when the two come together, it really pushes the envelope on the weird and beautiful electronic music has to offer. Music for Robots is an EP with Squarepusher collaborating with Japanese Z-Machine robots. The promotional video is out of this world and so we’re excited to see what the EP has to offer.

Tweens – Tweens
Not to be confused with the Disney Channel demographic, Tweens is an indie-noise explosion hailing from Ohio. They are really good at it too: their self-titled debut is being released on Frenchkiss Records.

Screaming Females – Live at The Hideout
Screaming Females is an indie band that often plays tag with punk rock. The trio is headed by vocalist Marissa Paternoster who has the prowess and energy on-par with Karen O but a sound that is more raw and energetic. This is a live album recorded over the course of two nights at the iconic Chicago theater. The band plays a sold out show this Saturday at Asbury Lanes but tickets are available for their Kingston, NY show on May 17. The night before is a free show with Bleeding Rainbow and more at Brooklyn Night Bazaar.

Sandy Pussy – Sandy Pussy
If you had a hard time talking about Perfect Pussy around the water cooler, then HR will be none-too-happy once you discover this great surf-rock gem. They are based on the west coast but we certainly hope they can venture to our neck of the woods soon.

The Faint – Doom Abuse
A band can be only a part of the post-punk or dance-rock revival, right? Not if you’re a band called The Faint. Conor Oberst was a “founding member” of the band, long before The Faint was a name that actually stuck. Doom Abuse is the group’s eighth full-length recording. (ninth if you count the album they did as their former moniker, Norman Bailer, but only sixth if you don’t count for their two stellar remix compilation albums. The group plays three tour dates in the NYC/Brooklyn area, all of which is still not sold out. (but certainly will sell out soon) May 14 is Music Hall of Williamsburg, May 17 is Webster Hall and May 19 is the smaller Bowery Ballroom.

Nostalghia – Chrysalis
Avant-garde electronic music doesn’t even begin to describe this band. To get a feel for the band, you have to have an understanding of the trio’s musical ranges and likings. The trio’s instrumental checklist includes your standard guitar, piano and percussion but fuses some lesser-used (and lesser-known) autoharp, chakra bowl, cello, accordion and much more.

S O H N – Tremors
Post-dubstep project S O H N is from Vienna and London and are one of the newest additions to the 4AD lineup. It’s sultry, smooth and goes down quite easy. Definitely recommended for fans of James Blake and King Krule. S O H N hits both Bowery Ballroom and Rough Trade NYC on Friday, May 9 and Saturday, May 10 respectively.

PUP – PUP
There is a downside and upside to releasing an album in one country and then releasing it nationwide later on: the excitement is just that much greater. PUP is a punk rock band from our neighboring friends, Canada, on SideOneDummy Records. This album is their full length debut and will be made readily available across the globe. (finally!) Check them out at a free Brooklyn Night Bazaar show this Saturday. They co-headline with Hunters and will be opened by Big Ups.

School of Language – Old Fears
Remember Field Music? David Brewis has since branched out and called his solo project School of Language. “Between the Suburbs” is the pre-release single making its rounds and it is a good indication of what we can expect from the rest of Old Fears.