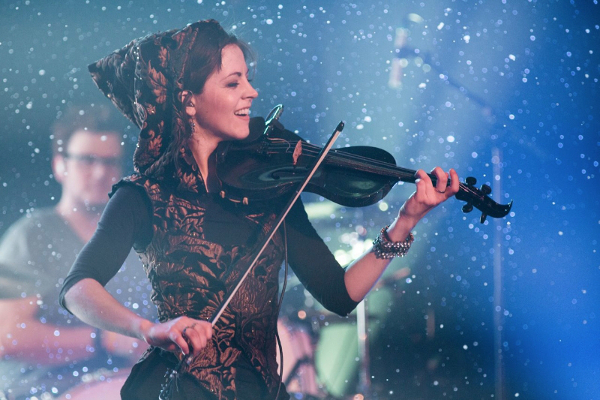 April’s over, bring on those flowers!…

The Ghost of a Saber Tooth Tiger – Midnight Sun
It’s not uncommon for famous people from different industries to start dating and its quite often a musician finds his/her other half with a model. Adam Levine and John Legend have recently tied the knots with respective others. But once-in-a-lifetime, a breathtaking wonderful thing happens: the model is also a talented musician. Such is the case with Charlotte Kemp Muhl, model for J. Lo’s clothing line and one-half of duo The Ghost of a Saber Tooth Tiger. The other half is the famous offspring of arguably the most famous couple in music: John and Yoko. The duo is playing a traditional concert at Bowery Ballroom on June 5 but you can meet the band and watch them perform songs from Midnight Sun at Vintage Vinyl in New Jersey and Rough Trade NYC in a week.

Lindsey Stirling – Shatter Me (pictured)
Why are there so many videos on Youtube? Answering this question requires hours of time to explain and years of research to back it up. But why are there so many aspiring musicians on Youtube? Two words: Lindsey Stirling. She was a quarter-finalist on a season of America’s Got Talent and made herself a house-hold sensation overnight as the hip-hop violinist. The genre-bending 27 year old is touring extensively throughout the US, with stops at Terminal 5, Starland Ballroom and The Space at Westbury in late June.

Klaus Johann Grobe – Im Sinne der Zeit
Representing Switzerland on our Album Releases posts is Klaus Johann Grobe, an indie duo that is as groovy and fun as we believe the 1960’s to be. The group is fun, psychedelic and will be welcomed with open arms by the Neat Beet staff should they make their way here.

Eli “Paperboy” Reed – Nights Like This
Eli Husock is a reincarnate of the soul and R&B of yesteryear. Best known by his stage name, Eli “Paperboy” Reed lives and breathes our parent’s generation of music. (he even rocks a stylish pompadour) This album marks his fourth studio album, his first as a Warner Bros. Records signee.

Maria Minerva – Histrionic
If we kept a physical map of the world’s continents and countries and pinned a region every time we wrote about an artist, Maria Minerva would be the first and only pin in Estonia. She is being heralded for her chill-wave, nu-disco sound and just a week younger than Neat Beet co-founder Nicholas Palumbo, she is still young enough for her career to take flight.

Ray LaMontagne – Supernova
In honor of Cosmos, here is a fun fact: a supernova is a brilliant, energetic occurrence that can happen to just about any star. (but typically won’t) Ray LaMontagne’s newest release is titled Supernova for quite possibly the same reasoning. The star folk musician’s fifth album is going to be a huge release and could very well push the artist into territory very few folk musicians encounter. Thursday and Friday of this week brings “An Intimate Presentation of Supernova” to Town Hall. The summer brings him back to the area at Toyota Oakdale Theatre in CT and Susquehanna Bank Center in NJ.

Saliva – Rise Up
Memphis is known for blues and rock but not typically nu-metal. Saliva is still strong after nine albums. Despite rampant line-up changes, the group is still touring regularly and has been for close to 20 years. Saliva plays Santos Party House and the Stanhope House this week.

Automat – Automat
Germany has always been progressive with its art forms and there is no exception for music. Automat isn’t so much what is hot now but what is electronic music to come.

Japan Soul – Plastic Utopia
Think of all of the “stand-alone sub-genres” and change your perception of them by combining them. Art-rock, funk, sophisticated pop music – all together. That is Japan Soul. We interviewed them not long ago and they are also well-loved by MTV-U, The Deli Magazine and much more.

Jacques Greene – Phantom Vibrate
If Jacques Greene was a representative of the house scene in Canada, it is only a matter of time until our neighbors of the North become one of the thriving epicenters of that music scene. Phantom Vibrate is being released on Vase Records (which also has Zodiac) and will help you dance through the weekend.

Whitechapel – Our Endless War
If your week is so stressful that you’re seeking anger and rage in your music, deathcore band Whitechapel is what the doctor ordered. (or what the doctor warned you about) Our Endless War is the Tennessee group’s 5th studio album, their fourth on Metal Blade Records. (Gwar, Cannibal Corpse, The Black Dahlia Murder) Whitechapel are one of the many heavy openers for DevilDriver on June 12 at Stage 48.

Pixies – Indie Candy
It’s rare that an artist whose last album was released decades still stays prevalent and is considered cutting-edge. Pixies are one (if not, the only one) band doing such a thing. They’ve toured extensively for Surfer Rosa, Doolittle and 1991’s Trompe le Monde. Now, they can add Indie Candy to their discography, an album 23-years in the making.

Chad Vangaalen – Shrink Dust
Canadian indie-rock solo artist Chad Vangaalen hails from Calgary and has been one of the forefathers of the indie music scene up there. He sometimes goes by Black Mold but keeps his name on his fifth studio album. The Bell House is the place to be on Thursday, May 15.

Wye Oak – Shriek
Indie folk duo Wye Oak are releasing Shriek, an album that’ll certainly land on a few “Best of…” lists at the end of the year. Their last effort entitled Civilian was a-top the A.V. Club list in 2011 and the group has certainly honed in on its niche since then. Shriek will have a lot to say this year. Wye Oak headlines Webster Hall over BRAIDS next Wednesday.

Naive Thieves – Vámonos
Equalvision has been a pioneer in emphasizing talented alternative bands for years. They continue that legacy with Naive Thieves, a CA-based band that hit things off at SXSW and will continue to make that mark with Vámonos, the group’s debut to the big time.

Old 97’s – Most Messed Up
Alternative rock and country had a rendezvous in Dallas and from it came the Old 97’s. The pioneering group have been pumping out records since 1994 and continue to change music in both genres. Old 97’s play with Lydia Loveless at Webster Hall on June 3.

Damon Albarn – Everyday Robots
When a CEO drops out of his/her seat, it is big news that makes us scratch our head. So when Damon Albarn left  Blur, we were left sad and confused…until Gorillaz. Then when he left Gorillaz, it felt like we were dumped twice by the same guy. He’s back, this time as a solo musician but showing us why we want him in our lives and why he is good to us. Everyday Robots is giving his old projects a run for their money. We’ve been telling you for months to go to (what looks like) sold out Governor’s Ball for Albarn and some other stellar acts. But you can certainly try to snag tickets for the festival’s official afterparty featuring Damon Albarn at Irving Plaza.

Rodrigo y Gabriela – 9 Dead Alive
There are rock duos, pop duos and electronic duos. But not one group has made flamenco music commercially popular and appreciated like Rodrigo y Gabriela. 9 Dead Alive is the Mexican duo’s fifth studio album and will be very successful, especially after their C.U.B.A. collaborative album released two years prior. The group is playing Beacon Theater on Thursday, Friday and Saturday. (your best bet for tickets right now is Saturday night) If you have plans this weekend but still want to catch the duo at their finest, they play the Xponential Music Festival in Camden, NJ and Gathering of the Vibes in Bridgeport, CT at the end of July.