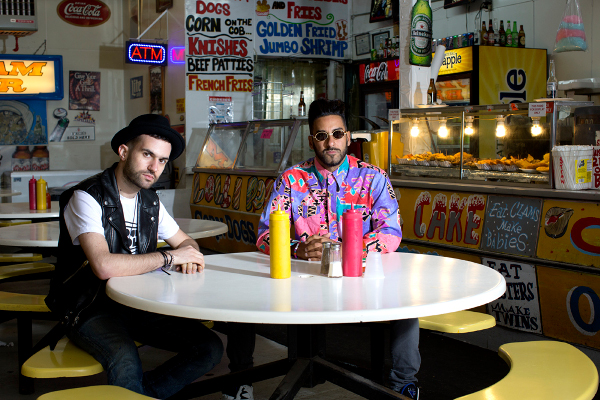 New doesn’t have to be scary…check out these albums…

Overlake – Sighs
Overlake is an alternative/shoegaze band from across the way…in Jersey City. The group is comprised of Tom Barrett, Lysa Opfer and Scotty Imp and are promising a lot of tour dates. Sighs is their debut album and they are promising. They have a ton of shows in the area, which include Fontana’s, Hoboken Arts & Music Festival and much more. Might we suggest seeing them open for The Everymen at their record release show in Brooklyn at Baby’s All Right.

Plague Vendor – Free To Eat
Free To Eat is being released on Epitaph Records, which should be exciting enough already. But Plague Vendor are here to impress more than the folks at Epitaph. They are a pop-punk band that punches you in the gut, takes your wallet and leaves you winded. Plague Vendor is hitting the road this summer on a ton of Warped Tour dates, including those in our area. Find more information on the Susquehanna Bank Center, Jones Beach Theater, XFINITY Theatre and PNC Bank Arts Center dates at the Warped Tour website.

Polar – Shadowed By Vultures
“Big beats. Strong booze. Loose morals. Good times.” reads the influences of this English hardcore rock band. Since 2009, Polar have really set the bar on the local scene. Be sure to keep an eye out for Shadowed By Vultures.

WC Lindsay – Easy Victim
Self proclaimed as a dichotomy of opposites coming together, WC Lindsay is worth a listen even if it just means trying to figure it all out. WC Lindsay hails from Philadelphia and is releasing his album Easy Victim this week!

Ramona Lisa – Arcadia
We’re huge fans of Chairlift here so we were very excited to learn that Caroline Polachek was branching out on her own. Her project is called Ramona Lisa, a name she has used on her own in the past. We certainly recommend it and wish her the most success on this exciting musical venture. She headline’s Baby’s All Right in a few weeks. (April 28)

Ingrid Michaelson – Lights Out
Underrated pop princess Ingrid Michaelson has been a soundtrack to many of your favorite shows and she returns with her sixth studio album. Her last four have done very well on the charts (Human Again peaked at #5 – whoa!) and Lights Out should do very well too. She plays a sold out Terminal 5 on May 29th. Die-hard fans and new converts should take the day off and make the drive up to Clifton Park for her Upstate Concert Hall show two days before.

Woods – With Light and Love
Brooklyn-based indie folk band Woods have been a local favorite for years and one of the hardest-working bands in the area. With Light and Love is the group’s seventh studio album in 8 years and will surely release a lot more critically acclaimed material in the near future. The group comes back to the area with a headlining show at Bowery Ballroom on May 16th.

Banner Pilot – Souvenir
Pop punk band Banner Pilot return with Souvenir, the group’s fourth studio album and their first in three years. They have often been compared to Hot Water Music and Screeching Weasel but have the mainstream-potential that the others haven’t received. The quartet is touring extensively with a Friday show at Asbury Park’s Asbury Lanes (May 23) and a show at the Knitting Factory the following day.

Duck Sauce – Quack (pictured)
A super-group made of just DJs? We thought the idea fizzled out with Swedish House Mafia but Armand Van Helden and A-Trak take on the title of the hottest group of celebrity DJs. Together, they make Duck Sauce and they can make just about anything they touch sexy and fun, even “Barbara Streisand”.

The Both – The Both
If you’ve been buying CDs during the 90’s, you probably have heard of Aimee Mann. She’s still doing quite well and creating great music, this time with the help of Ted Leo. Together, the duo is called The Both. If you haven’t seen the very funny video with Ted Leo’s “uncle” play drums, check it out. It’s the beginning of “Milwaukee” a track from the duo’s self-titled album. Although the group’s Bowery Ballroom show has sold out, there are plenty of tickets for the Music Hall of Williamsburg concert on May 1.

Jessica Lea Mayfield – Make My Head Sing…
At just 24 years old, Mayfield is a peer among the staff at Neat Beet. But her talent and prowess makes the alt. country/indie folk musician a rising star. She recorded her first EP at 15, while many of us were focusing on SATs and proms and has since opened for the likes of The Black Keys and Ryan Adams. She plays Rough Trade and Mercury Lounge later this month.

Afghan Whigs – Do To The Beast
2014: the year of the Afghan Whigs. They killed it at Coachella this year and are releasing their first studio album in 16 years! The Sub Pop Records staple featuring Mark McGuire (who recently released an album himself) released “Algiers” and will be touring extensively through the year. Lucky fans will be attending the sold-out Brooklyn Bowl performance on May 15.

Amps for Christ – Canyon Cars and Crows
Folk music may seem like a far-long stretch from metal but not if you’re Henry Barnes. The pioneering, founding member of Bastard Noise and Man Is The Bastard, Barnes quickly took to working solo and from there blossomed mellow, ambient folk project Amps for Christ. The themes of this project involve overall positive subject matters such as love, peace and relationships with God.

Horse Thief – Fear In Bliss
Psychadelic folk band Horse Thief is a quintet based out of Oklahoma City and is a band we will be keeping a great eye on. The band’s record release party is tonight at Baby’s All Right.

NEEDTOBREATHE – Rivers in the Wasteland
Southern Rock/Christian Rock band NEEDTOBREATHE is a trio comprised of a pair of brothers with cool names (Bo and Bear Rinehart) and Seth Bolt. (an equally great last name) The trio are signed to Atlantic and have won several Dove awards for their previous albums. Rivers in the Wasteland makes the band’s 5th studio album in 8 years.

Sonny Vincent – Cyanide Consomme
We all have a family relative we love very much, has been chugging along for a long time but never get to see. Sonny Vincent is our distant grandfather of punk. He continues to have an exceptional career as a solo artist and has contributed to other works, including Model Prisoners, Testors and FURY. To this day, he carries out the CBGB legacy in Cyanide Consomme.

Cloud Cult – Unplug
Experimental indie project Cloud Cult are doing something very exciting: releasing a live album. This doesn’t sound like a great feat in itself but when you take electric songs, make them acoustic and re-compose them it is almost like having another entire album altogether. Unplug was recorded to a very lucky sold-out crowd at the Southern Theater in their hometown of Minneapolis. Cloud Cult play an unconventional Bowery Ballroom show on Thursday where they play two sets (one electric, one acoustic) and have no openers.

Royal Flush – Grand Capo
Representing the borough of Queens, Ramel Govantes took on a career of hip-hop and gave himself the moniker Royal Flush. (presumably because of his Flushing roots) His debut album was produced by Buckwild and although he’s laid pretty low since Ghetto Millionaire, Grand Capo is going to have him explode on the scene. It is his first album in nine years.

Iron & Wine Played Intimate Show at The Space at Westbury