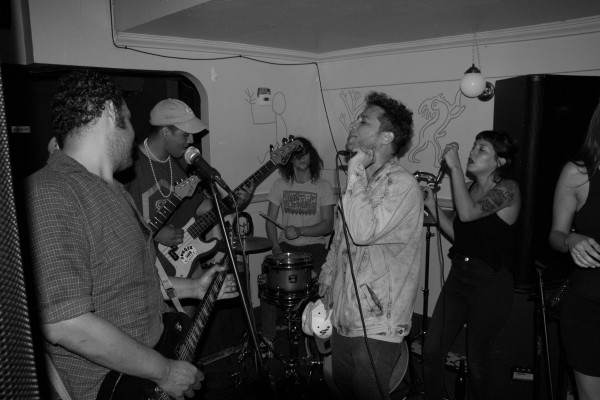 Puerto Rico has a diverse music scene that needs to be explored more, and one of the strongest scene is the indie garage rock and punk one. Davila 666, one of my favorite garage-rock bands of recent times, is one of the most popular bands amongst that scene. They’re now on a break, but AJ Davila (the main genius behind the band) is doing solo work that sticks closer to the garage rock/punk sound of his namesake. With a few tweaks and collaborations with some friends, including members of The Black Lips, and fellow Puerto Rican musician/producer and Brooklyn based Lola Pistola, the seven piece super group has been making noise across the Island and now NYC.

Seeing them live at such a small and intimate venue like the Elvis Guesthouse was appropriate, where they displaying raw energy and having a rollicking good time with catchy anthems and songs about partying, the band showcased the best of their pop and punk sensibilities. The group’s members don’t want you to think too hard about the songs even though the lyrics are sharp and carry some bite. The band can be described as a Hispanic Ty Segall super group.

I’m glad they were able to interact with other scene bands in Brooklyn and Manhattan, something that will really spread the word about their fun brand of fuzzy garage rock. Davila’s debut solo album Terror y Amor, and his follow up with Burger Records, Beibi are available for purchase and streaming. The show’s opener was Brooklyn based doo-wop garage band, The Teen Age. Blending fun and catchy rhythms with fuzzy and drowned guitar, this new band has a pretty unique sound to be on the look out for.