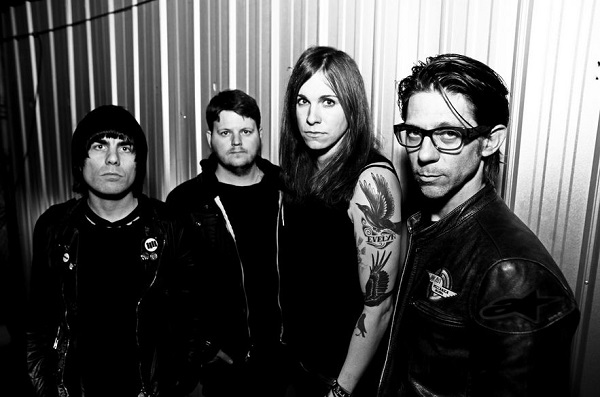 Before I get into the earth shattering performance Against Me! gave at Music Hall Of Williamsburg, I should mention that I caught Laura Jane Grace on her solo tour this past summer at both the NYC and Brooklyn dates. After publicly announcing to Rolling Stone that the singer was undergoing sexual reassignment surgery to transition from male to female, the buzz around these shows was high. The solo tour was an acoustic debut of new material from the new Against Me! album, Transgender Dysphoria Blues (out tomorrow). The band had undergone a massive lineup change since the announcement, leaving Laura to tackle her most personal songs to date without the original band behind her. Both shows had a respectful and reverent crowd, completely enthralled to be hearing the new material. Lyrically, the songs were heavy as hell and I couldn’t wait to hear them with a full band.

Fast forward to January 9th and my anticipation is high. Kicking off the show was The Shondes, a four piece from Brooklyn, NY. Instantly the crowd was attached to their not-so-standard version of punk, with a sassy front-woman and an absolutely ripping electric violin. Think Tsunami Bomb, but with a Jewish gypsy vibe. The Sidekicks were up next hailing from Columbus, Ohio and very much about the longhair don’t care. Their sound was a bit more mature, and the Weezer vibe was heavy. Altogether, they did a decent job of warming up the crowd for the frenzy everyone knew was coming.

Against Me! took the stage to a roaring crowd and launched into the new single, “FuckMyLife666“. With the new lineup in place, the band seemed cohesive and confident. Admitting that she was suffering from bronchitis, Laura asked the crowd to sing along but then noted that everyone was already doing that and to please keep it up. Second song in they played, “Pints Of Guinness Make You Stronger”, a clear crowd pleaser and a sign this was going to be one hell of a show. Laura looked so happy, truly in her element and proud to be playing the new material as she had imagined it. The new band, consisting of longtime guitarist James Bowman, Inge Johansson on the bass, and Atom Willard on drums, were smiling the entire time. Never have I seen an entire room so outwardly supportive and happy to take part in someone’s art. A peak moment was towards the latter half of the set, during “The Ocean” when Laura belts “If I could have chosen, I would have been born a woman. My mother once told me she would have named me Laura. I would grow up to be strong and beautiful like her.” The crowd roared with support, overwhelmingly happy to hear the passion in her truth. As a testament to bravery and perseverance to one’s true self, the crowd surfers did not disappoint.

Playing the radio hits like “I Was A Teenage Anarchist” and “Thrash Unreal” made the show accessible to the casual as well as diehard AM! fans. Most impressive was the encore, where Laura and Willard came out for an intimate rendition of “Two Coffins”, a song she had debuted during the solo tour and described as being about her daughter. Unflinchingly honest, she addresses the issues weighing most heavily on her mind as she transitions. How will her wife and daughter deal with the change? How will she avoid drugs and drinking as a coping method while her entire life is overhauled? When Laura plays she seems grounded, if not floored by the support of her fans. The band seemed so happy to be on stage with her, and clearly loving the crowd’s response to the old songs as well as the new. Closing the encore with “We Laugh At Danger (And Break All The Rules)” was a perfect way to address the evident fears in the new songs. Clearly AM! and their fans will charge forward, regardless of what other people might say.

Tagged: against me!, music hall of williamsburg, the shondes, the sidekicks

I never heard of Against Me! but when I read this writeup it made me want to check out all their songs.