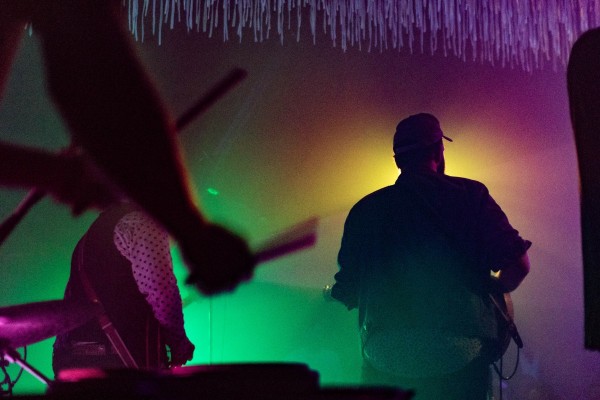 Sayounara Cameo Gallery! The Williamsburg venue we’ve hung out at plenty closed this weekend, with a final run of bands headlined by Caveman. Late night DJing by St Lucia & Plastic Plates kept an homage to the electronica vibes the locale was also well known for. The live sets didn’t feature a tearing down of the venue or anything drastic, though palm trees did crowd surf.

Before Caveman would play, we witnessed an aggressive, interesting set was from WALTZ. The trio reminded me of a glam, art house specter of The Ramones. Something about the fast tempo, absurdist lyrics and constant motion did it for me. Preceding them was a duo, HEART ACHE, who had a decent, yet somber guitar back and forth over a drum machine.

Dave Harrington was a welcome surprise, we haven’t touched base on his talents here since Darkside paused. I definitely understand which parts of that fusion are his now having seen him solo (or really with a merry band of collaborators, see the group huddle?) The set was purely instrumental and featured a fair amount of Harrington ‘losing himself’ within the music. When the vibe is right, the attunement you can feel with the being on stage is real. Harrington’s putting together his second annual holiday spectacular over at LPR on the 13th, loaded up to the brim with guest vocalists.

Before Caveman would take the stage, Mary Shah, wife of owner Jify Shah, would reveal a secret video compilation featuring warm wishes to him & anecdotes from Cameo Gallery’s employees, friends, and several artists, including Alan Palomo while he’s getting a haircut. Check that out here. Our best to these two on their next venture.

Caveman’s concluding set would be an enjoyable one, proving again how they’ve earned their success as artists. The band cut their teeth over the years at Cameo, even playing their first gig there way back. I really love their heavy percussion and instrumentation that wrap me in a comforting aura. A strong cut of the set list featured new material from a forthcoming record that continue this vibe. Singer Matthew Iwanusa regularly pumped the crowd up to celebrate the night with a humorous insistence, and being in the front photographing, I got hit by champagne multiple times. They closed out the set with “Easy Water.”

If you have any favorite memories from Cameo, share them below. We’ll all miss that kaleidoscopic curtain that defined live shows there.