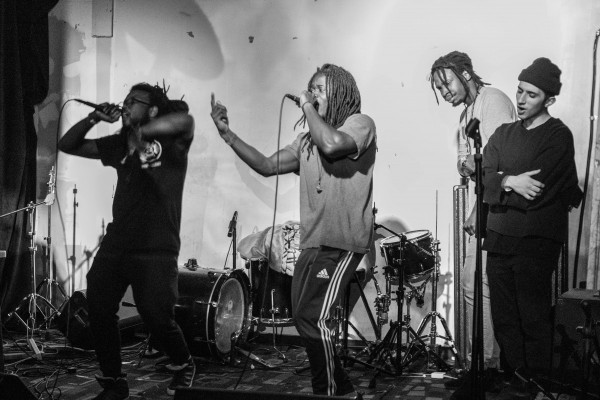 I ventured into Brooklyn recently to catch a night of underground hip hop. SUNY Purchase based arts collective 99 Sublime, visited some of Brooklyn’s niche venues over the week to ply their tunes. I caught them on the first of three nights, at Palisades off Myrtle-Broadway on the JMZ line.

99 Sublime’s performance was more like a series of mini sets, all tailored to whichever member took the stage for a few songs. The collection of sets, of which there were five, could be described as eclectic and only loosely correlated to one another. You can get an idea of their variety on their Soundcloud.

Zetetics, who co-headlined with 99 Sublime, put on a very strong showing. Amani Fela, who raps and fronts the group, had a cerebral sense to his lyrics, which really gains by being backed by the most instrumentation of the night. You can see these qualities exhibited in “Antebody“.

We also heard from Jersey based rapper Takt, who recently dropped a new single “Prizmatic” in December & percussionist/producer, Mowri.