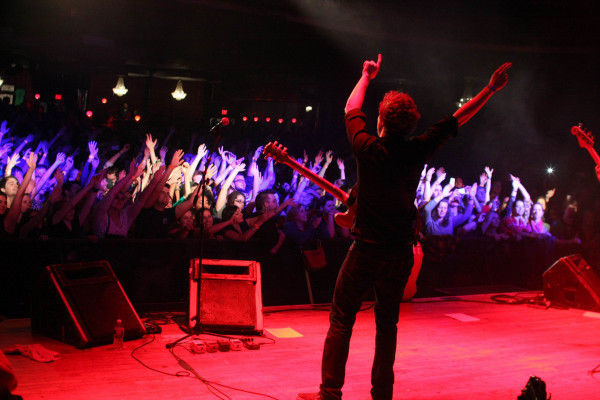 Documenting the indie music scene is a constant focus on the new. Usually that involves following current events and releases or forecasting what will be “in” next. As the year nears its end however, I want to take a moment to step back and reflect on a lot of bands we’re fans of here at Neat Beet that are no longer active. This year felt like we lost a lot of good acts amid all the wonderful sounds emerging.

The list is ordered chronologically by the bands’ last shows or, in lieu of that, announced departures, throughout the year. Check out a brief bio of each, a link to further writing and photography if we covered them, and music videos. I’ve also cobbled together a playlist featuring a couple gems from each artist’s work, new and old. I hope you’ll listen and find something worthwhile to commit to memory.

This lo-fi, indie rock trio was a vital part of the scene I stumbled upon when I started showgoing here. They called it quits definitively earlier this year, but each member is still very active with their own individual projects.

This quintet, helmed by Brenda Malvini, made lovely and vibrant pop music, which I first witnessed when they opened for Stars in 2011. The group ended with Malvini’s departure from NYC following their final gig. The group has been promising a final LP to put an epitaph on the project, which is now expected in early 2015.

Via Audio’s earnest and emotional brand of indie rock was most well known in the late aughts, when their 2007 record, Say Something, came out to wide acclaim. The band, now the duo of Tom Deis & Jessica Martins, released their third record independently this year, Natural Language. The Glasslands show was to celebrate its release, but also to say farewell to Martins, who departed for Los Angeles. Following that gig & tour, the band has been inactive, but have yet to announce any formal conclusion.

Pretty & Nice hailed from Boston, with a rock sound and attitude that could be described as effervescent. They announced a hiatus accompanying a synthy EP, Infinitely Forever. They held farewell shows in NYC, Boston & CT. I really dug their energetic 2013 record, Golden Rules for Golden People.

Darkside, a joining of forces by Nicolas Jaar & Dave Harrington, grew immensely popular following their 2013 LP, Psychic, selling out Terminal 5 in January. It’s a brilliant collection of downtempo electronic that mixes dance and ambient well. The duo decided to put things on pause this Summer, ending things for now with a show at Brooklyn Masonic Temple. They’re both very active around NYC and are hard to miss.

Slowdance was an indie pop band that got some serious accolades in 2012 for their sexy single, “Boyfriend”. It only recently came to my ears and I feel seriously remiss for having never caught them. The band imploded in September, but were thoughtful enough to put what would have been their debut LP up for free online.

It’s been a long time since violin rock band ZOX officially called it quits, but the group has all stayed on amicable terms. They reunite every few years for a one-off show at Lupo’s Heartbreak Hotel in their hometown of Providence, Rhode Island, the second of which happened this October. I felt quite privileged to cover it, and the atmosphere of joy in the audience made it one of my favorite events this year and well worth the trip. There was even a proposal during the concert!

Crystal Castles was really well known for a trio of wild, glitchy electronic albums and a raucous live show to boot. Alice Glass, who was half of the project with Ethan Kath, succinctly announced her departure via social media in October, effectively ending the band.

Hooray for Earth (via Matt Esposito)

Last Show: Glasslands 11/24 (supporting The Pains of Being Pure at Heart)

This rock group sported an anthemic sound, and seemed to be doing well, getting some real buzz this Summer with their second album, Racy. Its release was buoyed by a particularly catchy single, “Keys.” However, they abruptly announced an end during their performance with The Pains of Being Pure at Heart last month. Bummer!

One of the more inventive indie rock sounds out there was from Yellow Ostrich, who only very recently announced a conclusion to the project. It may have been precipitated by the announcement of Glasslands closing, so that they could end things properly, back where they began for the group.

The longest running act on this list is definitely Centro-Matic, who, after 19 years decided to conclude the project with a farewell tour. They just wrapped things up for good in Texas last weekend. The alt-country / indie rock band had a prolific series of released recordings over their lifespan, including one this year, Take Pride in Your Long Odds.

Smith Westerns at MHOW in 2013 (via Emily Korn)

Indie rockers Smith Westerns had a solid run off a trio of records, especially with 2011’s Dye It Blonde, which vaulted them into indie stardom. 2014 was a year of inactivity for the group, and the gap seemed to be an impetus for a split. The group plays a final show in Chicago tonight, and are rumored to be playing NYC as well.